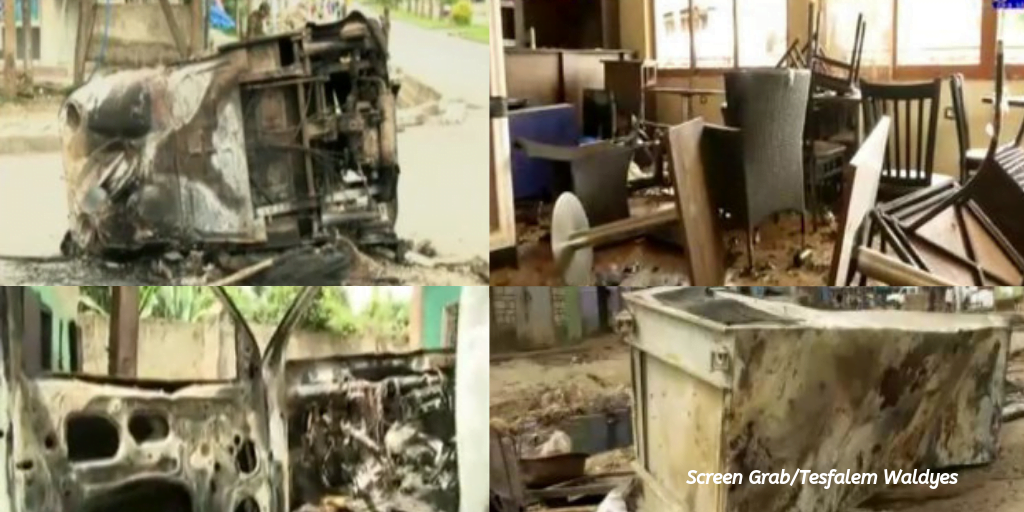 Addis Abeba, July 22/2019 – The number of civilians killed in Sidama zone in southern Ethiopia since July 18 has risen to “more than 35”, according to Yigezuh Adamu, a resident of Yirgalem who is currently in Hawassa city. “Hundreds of people are also displaced after their properties were vandalized,” Yegezu said. “We are trying to coordinate a report on the amount of casualties and property damages so as to provide it to the regional state,” Yigezuh said, referring to himself and his friends.

Hagere Selam is one of the most affected towns. Another eye witness who is also currently in Hawassa city told Addis Standard. “On Friday and Saturday at least three churches were burned to the ground in Hagere Selam by angry mobs who went out to the streets to protest the killings by security forces.”

Quoting an eye witness, DW Amharic reported yesterday that the number of people killed has risen to 34 and said 14 of the victims were killed in Hagere Selam town on Friday July 19 when the police randomly opened fire at a group of civilians who were marching toward a police station after a young man was killed the previous night.

According to the eye witness from Hagere Selam who, this afternoon, spoke to Addis Standard by phone, “the death toll from various places could be much higher. We are having difficulties of checking with relatives due to breakup of phone networks. But I have seen security forces shooting at everyone seen on the streets of Hagere Selam. I fled last night after they have detained my older brother. The situation is much worse in rural areas in the whole of Hula Woreda (where Hagere Selam is located at). People have lost their belongings and have fled their homes in search of safety,” he said.

However A senior security officer in Southern Nations, Nationalities and People’s regional state Police department denied the account when approached by Addis Standard and said the real number of deaths are still being investigated. “We ask the media to not take unverified numbers,” he warned, but admitted that “there are casualties in various places of the zone and four people are confirmed to have died in Hawassa alone; more than a dozen were also wounded on Thursday July 18 and Friday July 19.”

The other towns severely affected are Melga and Yirgalem. In Melga, eleven people were killed on Thursday and Friday by security forces. In Yirgalem, some reports say that Aregash Lodge, a popular Eco-lodge known for its tranquil, was burned. However Addis Standard couldn’t verify that information; neither the city’s police, nor the lodge’s telephone lines are reachable.

Accordant to sergeant Duba Kaawee, a police officer in Booree Woreda of Guji Zone, in Oromia regional state, more than 400 civilians who fled their homes from four different remote Kebeles (small districts) of Hagere Selam have come to Booree town looking for shelters. “Some of them have lost their loved ones either to a mob attack or security forces. They are reporting about mass vandalism and shootings. We are contacting the southern region emergency preparedness bureau to organize shelter, food and water,” he said by phone, adding “currently we are asking churches and mosques in the city and surrounding areas to house the displaced civilians, and together with the town’s people, we are trying to coordinate the supply food and water.”

There is no official figure on the number of causalities and the amount of property damage. However, a news hour broadcast yesterday by the South Radio and Television Agency, the regional broadcaster, showed substantial property damages in various places. Among them, burned cares, shops, bars and restaurants in Aleta Wendo town. It also featured distraught civilians who have lost their belongings. Million Matios, president of SNNPRS, said “what happened in Aleta Wendo is heartbreaking and should be condemned.”

The internet is still blocked in the whole region whereas cell phone connections to areas outside cities are hardly available. But several activists are reporting about mass arrests in many places of the Sidama Zone. The arrests which began on Thursday night in Hawassa include Getahun Deguye, general manager & Tariku Lemma, deputy general manager of the Sidama Media Network (SMN), a satellite television network based in South Africa with an office in Hawassa. Thw two were detained detained in Hawassa on Friday while having a meeting with local elders, Muluken Birhanu, news and program coordinator at the station, told the BBC Amharic.

Mass arrest also included most of the leaders of the “Ejjeetto” a youth group who have been at the forefront of organizing rallies and advocacy works to advance the Sidama’s demand for statehood. AS