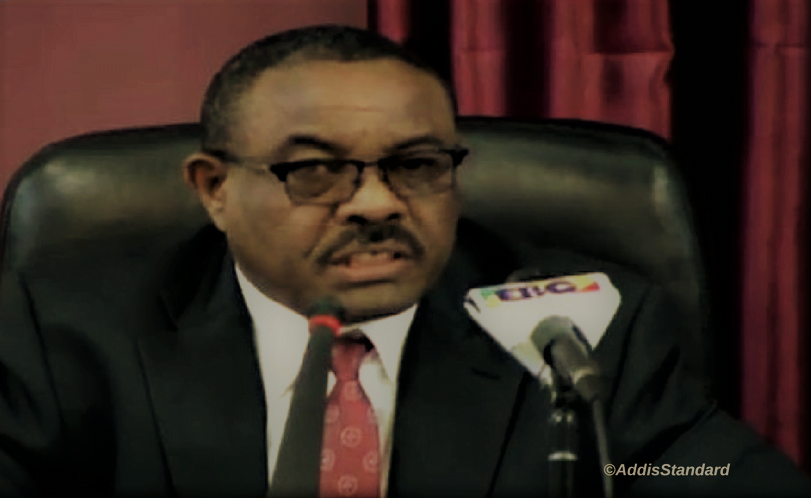 The PM also said “black market in forex” and “contraband” as well as “Khat trading” in eastern Ethiopia fueled recent violence, giving the violence ethnic and national dimensions. But the PM defended the federal army and the Somali region’s controversial “Liyu Police” force in the conflict with the exception of few “rogue members implicated in the violence”.

Addis Abeba, Oct. 26/2017 – Responding to questions raised by members of the House of People’s Representatives (HPR) Ethiopia’s Prime Minister Hailemariam Desalegn said that the ruling party EPRDF was having talks with Abadula Gemda, who resigned from his post as the speaker of the HPR citing “disrespect” to his party and people.The Prime Minister hopes the discussions will materialize in good results on how Abadula could continue his contributions to the federal government. “We will be happy if he reconsiders his decision. [However] the main point is the process is democratic and  followed a clear path.”

On the other hand, the Prime Minister told law makers that the government has accepted the resignation latter of Bereket Simon, his policy study and research advisor and ANDM’s veteran party stalwart.

However, although Abadula’s resignation was “unprecedented” in the history of the ruling party, PM Hailemariam said it should not be taken “out of proportion” and should not also be considered as related with the resignation nine days later of Bereket Simon, adding that the public should not be confused of these two unrelated events. “Bereket [Simon] has been asking to resign on several occasions in the past but the party had always talked him out of it” considering his immense contributions. “but just because he resigned doesn’t mean he is leaving the struggle.” The Prime minister has played down the implications of the two resignations saying it should be taken as “normal” acts in a country that governments itself with “democratic values.”

Commenting on the recent conflict that led to the death of dozens of Ethio-Somalis and Oromos in areas bordering both regions in eastern, southern and south eastern Ethiopia, as well as the displacement of more than 150, 000 Oromos from the Somali regional state and more than 300 from Ethio-Somalis from Oromia regional state, the Prime Minister attributed the prevalence of “black market in foreign currency”, “rampant contraband” and “the rush to monopolize Khat trading” in eastern Ethiopia as playing a major role in giving the conflict an “ethnic and national dimension.”  The PM mentioned as example that in the last few months, the Oromia regional state police and federal customs officials have apprehended “about two million dollars” on its way out of the country via the Somali regional state border in eastern Ethiopia.

However, the Prime Minister defended the role or lack thereof by the federal army in preventing the conflict as well as the role played by the Somali regional state’s special paramilitary force known as “Liyu Police” (Special Force). With the exception of few rogue agents, the PM said, both have played a significant role in preventing large scale atrocities. Some of these few agents who are implicated in the killings have left the country, he said, and the government was working to bring those in the country to justice. The Prime Minister also defended the “Liyu Police,” and brushed aside a question from an MP asking for the dissolution of the “Liyu Force” which is often accused of severe human rights abuses since its establishment in April 2007.  “Regions do have the right to maintain their own special forces.” “The big problem is whether these forces have participated in the violence, and not whether they are called “special or regular” police.”  Following the recent violence in Eastern Ethiopia, the BBC Amharic has reported a story of a woman who was displaced from her house and was kept in a jungle and repeatedly raped by members of the “Liyu Police.”

Regarding police forces structure and standard, the Prime Minister said the law makers were working on a new draft bill presented to them this past summer and that he expects the bill to be approved soon.

The Prime Minister also touched on recent fresh protests in Oromia regional state that are increasingly turning violent.  After admitting that the professional level of the media industry in Ethiopia as having been crippled by several factors, lack of capacity and professionalism among others, he also called on pro-government media houses recently accused of fueling ethnic tensions in the wake the recent violence in Buno Bedelle zone of the Orioma regional state in South West Ethiopia to exercise caution. At least 14 people were killed and more than 1, 500 displaced following the violence, according to officials from the Oromia and Amhara regional states. But other accounts, especially on social media, claim both the number of dead and displaced higher than what is admitted by officials.  AS