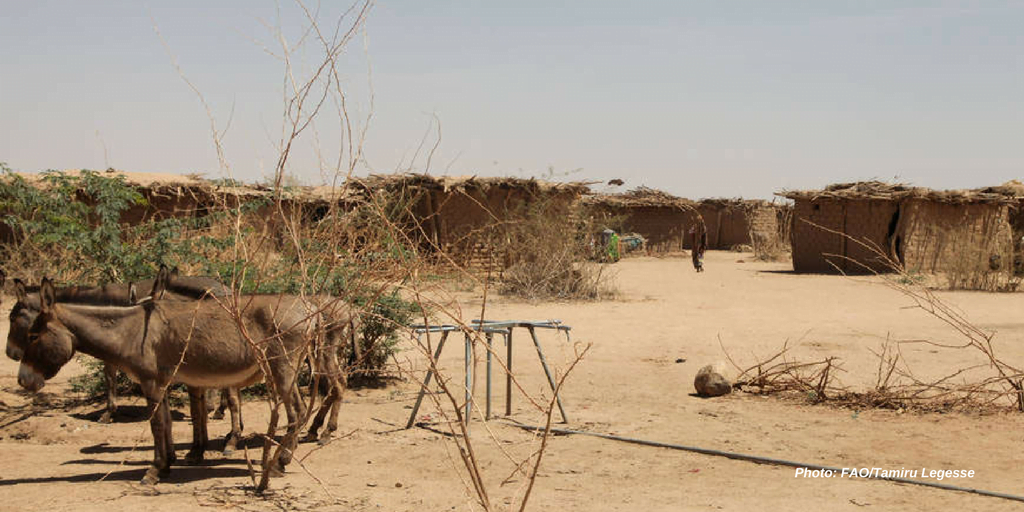 “This drought has been going on for a long time and we have lost much of our livestock,” Hajiji Abdi, a community elder told them. “If we didn’t get food assistance, we would be in big trouble – but this is still not enough to feed us all.”

Back-to-back droughts have left at least 8.5 million people in Ethiopia in need of food aid. In the Somali region, rains have failed for the third consecutive year. The death of many livestock has caused a breakdown in pastoral livelihoods, contributing to soaring hunger levels and alarming increases in malnutrition rates. While the emergency response led by the Government has begun to stabilize the situation, additional resources are still urgently needed to prevent any further deterioration.

“It is essential to invest in preparedness and provide farmers and rural communities with knowledge and tools to safeguard themselves and their livelihoods. We’ve witnessed here that saving livelihoods means saving lives – it is people’s best defense against drought,” said Graziano da Silva, Director-General of FAO, the organization that is providing emergency livelihood support for drought-affected livestock owners and farmers, as well as support to stabilize communities’ long-term resilience.

“A drought does not need to become an emergency,” said Houngbo, President of IFAD, the agency that provides the government with loans, grants and technical expertise for rural development projects. “We know what works. In the Somali region, where there is investment in irrigation systems, water points, rural financial institutions, health and veterinary services and other long-term development projects, the communities can better sustain themselves and their livestock through this devastating drought. This is what we need to build on.”

“We have seen clearly here that working together the three UN food agencies can achieve much more than alone,” said Beasley, head of WFP, which is providing life-saving assistance to 3.3 million people in the Somali region, the epicenter of three years of drought.

“Of course we already collaborate, but now we will take these models and replicate them and scale them up across the world. We need to save lives while investing to support sustainable, resilient environment for communities across the globe so they prosper and succeed,” he added.

The impact of long-term development projects undertaken by the three food agencies was evident in the Tigray region, where agency heads saw irrigation schemes, fruit nurseries and health centers that are boosting productivity, increasing incomes and improving nutrition so that rural people can better withstand external shocks like droughts.

All three agencies are working closely with the Government of Ethiopia to eliminate hunger in the country. In meetings with Deputy Prime Minister, Demeke Mekonnen, and other high-level government representatives they discussed the need for greater collaboration and investment in resilience.