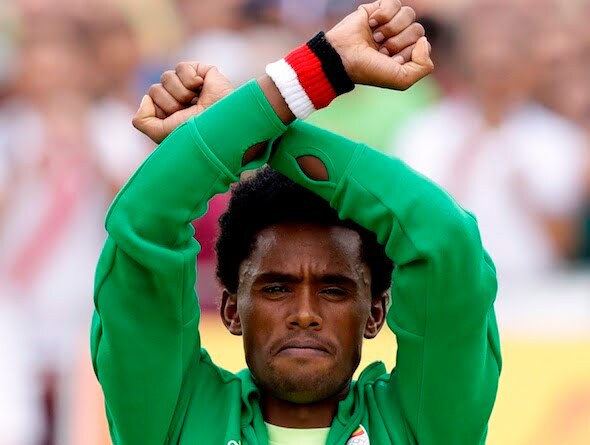 Olympic silver medalist Feyisa Lilesa took complete control of the conversation surrounding his outstanding performance in Rio. Typically, conversations after an Olympic event circle around the standard, “What were you thinking during the last mile?” or opportunities to talk of one’s own achievements. Feyisa completed the incredible feat of finishing a marathon in 2:09:54, yet, he brought light to a more serious issue: Ethiopia’s killing and marginalization of the Oromo population.

Human Rights Watch and Amnesty International released reports this past summer documenting the killings of hundreds, mass incarcerations of thousands, and police state actions taken against the Oromo people. Despite these well-documented reports, public outcry and awareness in the West, including the US, has been almost non-existent until Feyisa brought the issue front and center.

Now that America is forced to acknowledge the issue, it must address its interest in Ethiopia. But the US continues to lose ground by expanding its credibility gap since its president Barak Obama referred to the government in Ethiopia as “democratically elected.” (EPRDF, the ruling party in Ethiopia, won 100% of the last general elections in May 2015. Even Saddam Hussein’s Ba’ath Party failed to ‘receive’ 100% of the vote). But by supporting countries that give a façade of democracy, the US delegitimized its credibility in the rest of the world. It failed to hold its allies to the same standard it holds its adversaries.

There is no doubt that Ethiopia is a strategic ally of the United States. Ethiopia headquarters the African Union, which ironically declared “2016: The African Year of Human Rights.” Ethiopia is also a significant partner in counterinsurgency and counterterrorism against Al-Shabab in neighboring Somalia. Additionally, according to numbers obtained from the United Nations High Commission for Refugees, Ethiopia hosts close to 750,000 refugees, mostly from South Sudan and Eritrea.

Ethiopia should be applauded for this and appreciated for the significant role it plays in these important efforts. However, good performance in one area should not permit overlooking human rights violations. The government’s failure to address the Oromo political and economic question over the past decades is now revealing the inherent fragility of the ruling party, which should serve as a caveat in American foreign policy to determine the right partner in the region.

Understanding the issue, the US must look at the tools it possesses to exert influence. In international affairs and foreign policy the US suffers from having a lot of carrots but only a few sticks. Oftentimes, its strongest stick may be disengaging, which further limits its ability to influence a country to act in a manner consistent with is beliefs. As such, disengaging is not a preferred strategy. It must, therefore,from continue to engage but address these key concerns.

This year, the United States plans to invest over $513 million in Ethiopia of which $1.07 million is dedicated to peace and security efforts with another $4.13 million dedicated to expanding democracy, human rights, and governance. It is time to implement a system of accountability on how this money is being used in Ethiopia.

True, the development assistance by the United States plays a significant role in Ethiopia. On almost all fronts, Ethiopia trends well developmentally: access to education is up, illiteracy is down, basic health service coverage is expanding, its GDP is growing, and life expectancy continues to rise. But Ethiopia’s position internationally in the Human Development Index is still low. In addition to that the growth is neither equal nor equitably shared. The government is accused of opening access to development to its members and people from a minority ethnic base. This absence of inclusive growth brought the underlying tensions to the surface. Until all parties have equal opportunity to prosper, tensions will continue to rise.

Seeing that growth is not ubiquitous, Ethiopia must look for ways to create inclusive growth. In an agrarian society, land ownership is key. Oromos continue to be economically disenfranchised and politically marginalized in that they possess very small quantities of the land in Oromia. Given the current drought in Ethiopia, Oromia is also one of the most affected regions.

If true democracy is something the US wants for Ethiopia, it cannot achieve its wishes while more than 33% of the population is silenced and killed by the government the US claims to support.

The political unrest has spread outside of Oromia to the Amhara region as well. If the US hasn’t learned much from protests across Africa and the Middle East, it must now learn that people will make their voices heard in one way or another. Violent response by the government to marginalized populations does not end well. The US should learn from similar events around the Arab Spring and the Rwanda genocide to have swift, deliberate action with an international coalition. It must also look at its foreign assistance to find better ways to extend influence. Lastly, it must strengthen its credibility by not supporting fake democracies around the globe.

To this end, the US should have Feyisa to thank for bringing the issue to its door steps.

Ed’s Note: David Thompson is a J.D. Candidate at Washington & Lee University School of Law and Veterans4Diplomacy Fellow with a BS in Economics and an MBA-Leadership from Liberty University. He can be reached at thompson.j@law.wlu.edu

Opinion: The Qilinto Massacre: the truth shall be revealed