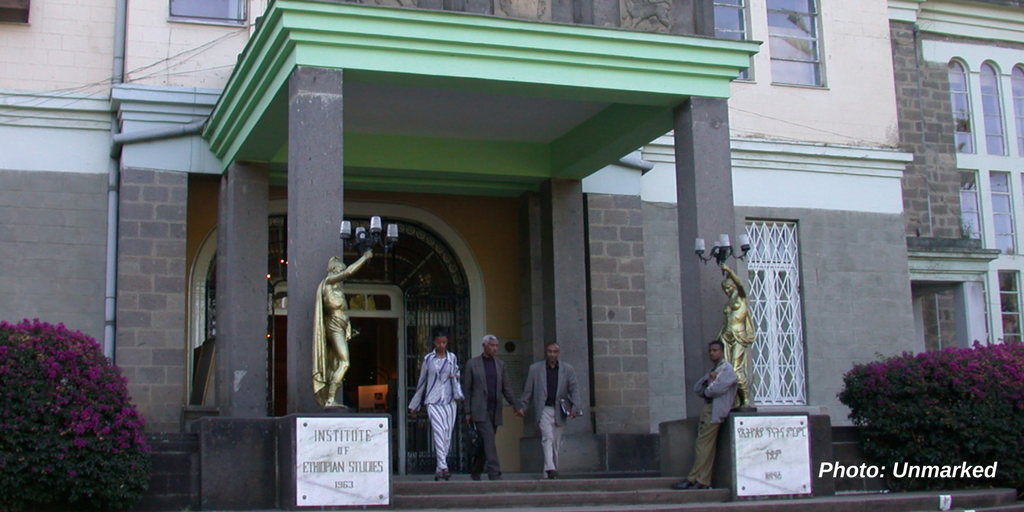 That said, I agree with Hewan that the field of Ethiopian Studies remains overly embedded in Eurocentric cum colonial discourses that reflect the temporality of the emergence of the field, the modern Ethiopian state (with its current geographical and ideological foundation), and the subjection of the later to European imperialism (as well as colonialism). As such, projects of decolonization are apt, not least when the engagement of the field with postcolonial and decolonial discourses that are gaining currency in comparable non-European places such as South Africa and Latin America. But, I am a bit skeptical about Hewan’s prescriptions on how we go about the project and why we must do it. 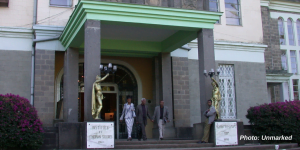 In this undated picture visitors leave the Institute of Ethiopian Studies, situated inside the Main campus of the Addis Abeba University

To argue that the discourse of Ethiopian Studies (more broadly African studies) is shaped by Euro-specific categories and ideas is one thing. It is a point well established by scholars before (some of whom are cited by Hewan).[1] But, to argue that it can be transcended and/or improved by Ethio-specific categories and ideas is another. This is not a point articulated but assumed by both Hewan and others who took issue with the Eurocentrism of Ethiopian Studies. From the illustrations in the article, one can gather that her call for decolonization of the Ethiopian Studies appears to have only translated into methodological nationalism which is as problematic as Eurocentrism.

In conversations with Ethiopian colleagues who are as concerned about Eurocentrism as the author of ‘decolonizing Ethiopian studies’ is, the romanticism of Ethiopian-made conceptual categories (Amharic concepts to be exact) and more broadly the production of nationalist epistemology are themselves products of Eurocentric scholarship and hence cannot totally be outside of it. Besides, language (scholarly or otherwise) is not a neutral medium of communication and this is no exception to Ethiopian languages. Power (imperialism) is implicated in it. As much as European imperialism was crucial to the emergence of what the author calls ‘the social sciences in the Western world’ and its colonial discourses, Ethiopian imperialism cum nationalism was equally decisive in the formation of Ethiopian Studies under the aegis of the Institute of Ethiopian Studies.

The author rightly claims that the Institute of Ethiopian Studies is ‘the most important secular institution of Ethiopian epistemology’.  Seen from the point of view of the peripheral subjects of the Ethiopian state (or the marginal objects of the field of Ethiopian Studies), the Ethiopian epistemology institutionalized by the Institute of Ethiopian Studies has historically been exclusionary. Consequently, the institutional practices and preferences of this Institution or the field of study it has sponsored since the middle of the 20th century found wanting on grounds other than Eurocentrism (e.g. on grounds of the dominance of state-centric/Addis Abeba-centric works, the exclusion of local vernaculars or world-views other than that belonging to historic Abyssinia).[2]

Ironically, the study of the social, political, and historical experiences of the peripheral subjects of the modern Ethiopian state was redeemed by what the author might probably consider Eurocentric, and hence, unqualified non-Ethiopian scholars.[3] Contrary to this suggestion, non-Ethiopian scholars of the field approached their study with concepts that are not always drawn from Europe.[4] Hewan’s silence or lack of concern with these sides of the field of Ethiopian Studies probably reflects her position in the wider field of the scholarship that is generally as orientalist as the globally dominant genres that she critiques. In my view, it also suggests the inadequacy of the mere replacement of Eurocentrism with an Ethiopian version of it that is oblivious to its limits.

The opinion is problematic on other grounds as well. First, it depicts a very one-sided picture of western scholarship. It emphasizes its limitations. To a certain extent, this is understandable and plausible. But, the most persuasive arguments about the Eurocentrism of western social science do not often translate into arguments about localizing – a mimetic (hence Eurocentric) one at that – of the production of epistemology. Instead, it is often limited to arguments about (1) ‘provincializing’ the colonial but unavoidable discourse about modernity,[5] (2) ‘delinking’ from the colonial discourse about non-European modernities (not necessarily through the production of knowledge in vernaculars local to non-western societies),[6] (3) spatially and temporally relativizing polities’ experience with modernity,[7] and (4) considered comparativism.[8]

In view of that, I found the remarks (or suggestions) in the article about the impossibility of translated knowledge (including comparison), the superiority of locally produced epistemology, the desirability and importance (as a decolonial strategy) of penetrating the global field of Ethiopian Studies through scholarly works produced in local vernaculars (e.g. Amharic) as less convincing and more akin to methodological nationalism than ‘decolonization’ as articulated by participants (or sympathizers)[9] of the recent South African student movement that was mentioned in the article and its academic preludes in postcolonial theory and beyond.[10] Furthermore, the article, addressed to consumers and producers of the field of Ethiopian Studies, written in English by an Ethiopianist scholar engaged with and informed by globally produced scholarly works, evinces the possibility of translated knowledge including comparison that the author seems to deny westerners studying Ethiopia. It also appears to undermine the claim that local vernaculars are more effective than the globally hegemonic vernaculars (such as English) as mediums of conversation about decolonizing the field of Ethiopian Studies. On a different note, the article’s focus on the global field (to the exclusion of the national field which I submit must be decolonized from its Abyssinia-centrism) exposes the dualistic nature of the author’s methodological nationalism, i.e. fostering the nationally hegemonic discourse on Ethiopian Studies at the global level without being much reflective about its limitations beyond Eurocentrism.

Finally, access to local language and/or place is not in and of itself sufficient for methodological thoroughness. The object of study and the reasons for inquiry play important roles in determining that. Put in other words, just because one is a local or well versed in a local language does not mean she/he has methodological advantage over non-locals in what she/he considers the goal of knowledge production – ‘full’ understanding of a subject (I do have reservations on whether ‘full’ understanding, whatever that is, should be the goal of knowledge production). The asymmetry of lack of knowledge argument concerns locals too, particularly locals with limited access to, say, a field of scholarship (e.g. the field of Ethiopian Studies) that a non-local with sufficient training may identify as an object of critical study in the same manner as the author did in her article. From the participation of westerners in the critique of colonial discourses and in projects of decolonization in a more rigorous and reflective manner, one may safely assume that methodological rigor is more important than idealized symmetry of discourses about Ethiopia, its history, and modernity, among others, via the participation of its (nationalist) scholars whose approaches to their study are equally prone to limitations including but not limited to Eurocentrism.

ED’s Note: The writer is a PhD Candidate at Melbourne Law School.  He is a lawyer by training with an interest in Ethiopian legal history and engages with Ethiopian Studies. He can be reached at hailegabrielfeyissa@gmail.com.

[1] Mesay Kebede, Africa’s Quest for a Philosophy of Decolonization (Vibs, 2004).

[4] See, eg, Charles McClellan ‘Perspectives on the Neftenya-Gabbar System: the Darasa, Ethiopia’ (1978) 33 Africa: Rivista trimestrale di studi e documentazione dell’Istituto italiano perl’Africa e l’Orientesee 426; 54J. Mantel-Niećko, ‘The Division of Ethiopia into Regions According to the Native Land Typology in Use at the Turn of the XIXth and XXth Centuries’ in Joseph Tubiana (ed), Modern Ethiopia from the Accession of Menilek II to the Present: Proceedings of the Fifth International Conference of Ethiopian Studies (A.A. Balkema, 1980) 471.

[10]For an overview and African inflection of what I consider to be the prelude to the current trend in the decolonizing African studies/curriculum movements, see Pal Ahluwalia, Politics and Post-Colonial Theory: African Inflections (Routledge, 2001).