Its general manager Guillaume Massiera positions it somewhere “between the Hilton and the Sheraton”; he doesn’t pretend his hotel to be outrageously luxurious; (unlike other branches of the hotel throughout the world, this one misses out on the fun of having a swimming pool); but Mr. Massiera believes since the Radisson Blu Addis Ababa opened its doors on January 9th this year, it is “definitely getting a fair share of the market”; and he says the thing he is most “proud” of in his 11 years with Radisson Blu is the 300 staff members of the hotel in Addis Ababa; and if the World Economic Forum comes to Addis Ababa where there is already an explosion of the hotel industry, then so be it. “We are fully booked, our staffs are ready to give our guests a 100% satisfaction,” Mr. Massiera told this magazine.

It opened its doors at a time when Addis Ababa was chocking-busy with the 2012 AU summit in January, and since then it has always been “very busy.” But what is it that made a hotel so famous in so short period of time?

First is its worldwide reputation as a hotel for business and luxury. Radisson Blu Hotels & Resorts is part of the Rezidor Hotel Group that is currently operating more than 230 hotels worldwide, with another 40 projects under development in Africa only, according to Mr. Massiera.  Its partnership with a name as powerful as Carlson, a privately held global hospitality and travel company based in Minneapolis (USA) helps too. Carlson is the majority shareholder of The Rezidor Hotel Group and together, “Carlson and Rezidor have 1,070 hotels in operation in more than 90 different countries, and 240 hotels under development,” according to the hotel.

It is no nonsense.  In every place it operates, Radisson Blu is known for treating its customers with a bursting lavishness. It has the “Yes I Can” motto for the last 25 years, (“Barak Obama’s campaign took it from us”), and takes its “100% Guest Satisfaction Guarantee” dictum “very seriously,” Mr. Massiera says.

Second is its lucrative location. It is located at a walking distance from the United Nations Conference Centre and is in the heart of the city from where access to any part of the city is smooth. 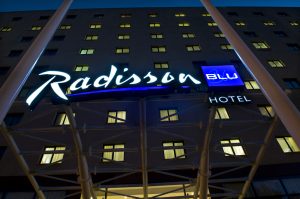 Third is its creativity in handling some of the unfortunate challenges the hotel faces; lack of adequate parking lot is the most unfortunate. But Mr. Massiera says the valet parking arrangement is working just fine. (The staffs at the entrance are only happy to assists customers find a place for their cars, and they bring the cars back with a big smile on their faces.) There will be further arrangements with the booming neighborhood to share parking lots too, according to Mr. Massiera.

Inside, the Radisson Blu partnered with Tomoca coffee, which is running the coffee shops located in the hotel lobby. It also partnered with Biogenic Beauty Spa, a lavish beauty salon known for its manicure, pedicure and massage that resulted in the opening of Rainforest Day Spa inside the hotel. More unique though is the Radisson Blu’s approach to establish more partnerships with restaurants and sports clubs in town where its guests will be recommended to dine out and work their body out. Also for those who would like to have a weekend excursions Radisson Blu is evaluating resorts and lodges outside of Addis Ababa that can give “the 100% guest satisfaction” on behalf of the hotel, Mr. Massiera revealed.