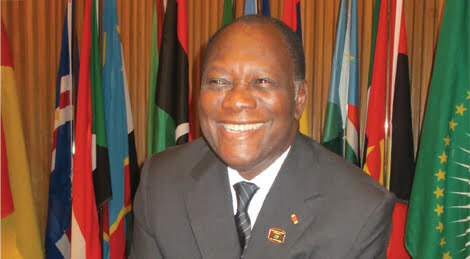 The AU needs “international support” to deal with the crisis in northern Mali, said Alassane Ouattara, President of Ivory Coast, in an exclusive interview with this magazine during the 19th AU head of states and governments summit held in Addis Ababa, Ethiopia.
But when asked for his reaction on reports that some countries like France were considering a military intervention in Mali, President Ouattara said “it is going to be an African operation.”

However, on July 23rd, European Union Foreign Policy Chief Catherine Ashton said the EU was “extremely concerned” by the fast unfolding events in Mali, where militants affiliated with al-Qaeda in the Islamic Maghreb (AQIM) took control of most cities in Northern Mali from separatist group MNLA in June this year. A week before the statement from Ashton, the EU sent a team to neighboring Niger to train local security personnel in the fight against terrorism.
President Ouattara was elected as the new Chairman of the Economic Community of West African State (ECOWAS) in February this year and is leading efforts by the regional body to diffuse the escalating situation in Mali.

“Let’s do what we are doing at the AU. We have set up a good time table of July-August,” said President Ouattara, adding, “it’s going to be an African operation, and we will see how things develop.  Of course we need the international support.”

The AU has urged the United Nations’ Security Council “to extend full support to the African-led efforts and take all decisions required,” according to a statement from its Peace and Security Department.

It also called on its Commission on Human and People’s Rights to “investigate the human rights situation in northern Mali, including the atrocities committed against the Malian military and their families in Aguel’hoc, in January 2012.”
Military sources at the African Union see the EU, France in particular, increasingly toying with the notion of a military intervention in Mali.  In mid June French Foreign Minister Laurent Fabius raised suspicions when he said foreign military powers were likely to intervene in Mali. “In the north, at one moment or another there will probably be the use of force,” he told the media, but said it would first have to be an African led intervention.

In the last week of July six armed militias in Mali have joined forces and vowed they will retake the country’s north from the Islamists and rebel groups. But an official from the AU PSD told this magazine that the AU needs to sort out the complicated power play in the capital before it provides any support to “any military group acting in the name of dismantling Islamist networks in the northern part of the country.”