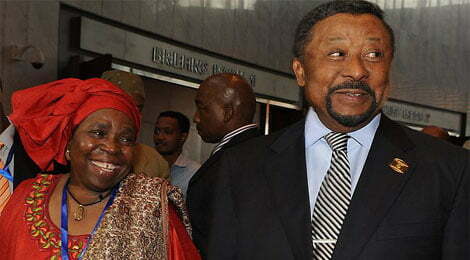 Mrs. Dlamini-Zuma may have been Ping’s bitter rival a few months ago, but she was not short of a courteous diplomatic thank you.

South Africa’s former Home Affairs Minister Nkosazana Dlamini-Zuma has officially assumed the office of the AUC as the first chairwoman as of today Oct. 15th. She is also the first South African to lead the continent’s body.

The ceremony was attended by Hailemariam Desalegn, Prime Minister of Ethiopia and President Thomas Boni Yayi of Benin, who is the current AU chairman.

Ever since South Africa submitted the candidacy of Mrs. Dlamini-Zuma as the next nominee in Sep. 2011, the continent was torn between countries backing the incumbent Jean Ping and those who threw their support behind South Africa.

The first attempt to elect the chairperson ended in a deadlock in January 2012 and the seven months of waiting period until July had witnessed a heavy collision of diplomacy between South Africa, which failed to back down its candidacy as was widely expected, and Nigeria, which stuck to its support for the outgoing chairperson Jean Ping of Gabon.

Following intense behind-the-door-discussions, however, the ex-wife of South Africa’s President Jacob Zuma, Mrs. Dlamini-Zuma was voted by more than the required 2/3rd votes during the 19th AU head of states and governments summit held in July in Addis Ababa, Ethiopia.

Her election brought to an end one of the most divisive election campaigns that had dragged on for nearly ten months.

Mrs. Dlamini-Zumais widely known as a seasoned technocrat with a proven track record of diplomatic and managerial experience.

But many admit she is assuming one of the toughest jobs in the continent. “As I am sure Dr. Zuma knows well, the task ahead could be arduous and there could be some hurdles along the way,” said Prime Minister Hailemariam, But “we will be by her side to facilitate and advance the achievements of our strategies and programs.”   “There is a long way to go,” admits the outgoing chairperson Ping.

The AU faces huge criticisms for lacking the necessary leadership dynamics to cope with a rising continent. This year it had finished the second strategic plan period that ran from 2009 – 2012. A yearlong break and 2013 will mark the beginning of the third strategic plan period.The second and much talked about strategic plan alone had 18 objectives that were hoped to have been met by the year 2012. But a closer look at each reveals a shocking level of deficit in all the objectives.  A quick glance at some of the objectives that were supposed to have been met, such as continental security and stability, sustainable economic development, continental integration, good governance, democracy and human rights makes it clear there is no need to go on to mention the rest.

The future of post Gaddafi’s Libya, Post Ben Ali’s Tunisia and post Mubarak’s Egypt may look bright for now but all are faced with monumental challenges of security and institutional disorder; Mali has continued posing a clear security danger to the continent; and although there are encouraging progresses as of late Somalia and the two Sudan’s still need a watchful eye.

In her acceptance speech Mrs. Dlamini-Zuma promised the AU will spare no efforts to resolve the ongoing conflicts in some parts of the continent. Mali’s, she said, was a crisis that “has the potential to spread through the region and even to the continent.”  “There are many more hills to climb ahead of us.”

But she promised under her leadership, and together with the rest of the teams,the AU will take leadership roles in preventing and resolving conflicts and will embark on finding “African solution to African problems.”

The outgoing chairperson Jean Ping of Gabon had never enjoyed massive support from the continent and his popularity plunged following AU’s handling of the revolution in Libya that had quickly turned into a full-blown civil war. But in an exclusive interview with this magazine Ambassador Ramtane Lamamara, AU’s Peace and Security Commissioner, has staunchly defended Ping’s position in Libya. “There was nothing he single handedly decided on matters of Libya,” Ambassador Lamamara said, “everything that happened in Libya happened with the consent of the AU member states. He was only implementing the wishes of the heads of state.” He also louds Ping’s “great contribution” in establishing AU’s peacekeeping mission and for working tirelessly to enforce military interventions by the AU in troubled states.

Prime Minister Hailemariam appreciates “his indefatigable work to strengthen the Commission with a view to enhancing its efficiency and effectiveness.

Although his critics point out to his failure in the handling of Libya it was during his reign in the last four years that the AU established its own peace keeping mission that were since dispatched to Somalia and the troubled region of Darfur in the Sudan. “During his term of office, the numbers of peacekeeping troops deployed in Somali, Sudan and elsewhere under the auspices of the African union have significantly increased,” said PM Hailemariam.   He also praised Ping for the important role he played in “expanding and consolidating Africa’s strategic partnership with the outside world.”

Mrs. Dlamini-Zuma may have been his bitter rival a few months ago, but she was not short of a courteous diplomatic thank you. “Thank you Dr. Ping, for working tirelessly,” she said, “I will build on the foundations that you’ve built.”