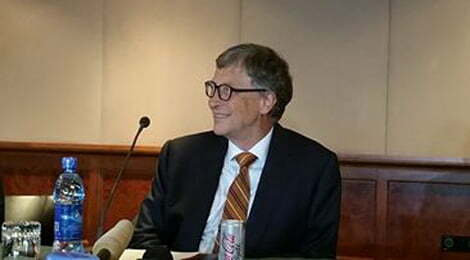 In a roundtable with local and international members of the press, US high tech billionaire and philanthropist Bill Gates said that there is still a lot to be done in Ethiopia in health and agricultural sectors. The roundtable was held yesterday at the Sheraton Hotel here in Addis Abeba after Mr. Gates met with high level government officials including Prime Minister Hailemariam Desalegn. The discussions with Prime Minister included Ethiopia’s second phase of Growth and Transformation Plan (GTP II) which, according to Gates is “equally ambitious” with its predecessor.

The Bill and Melinda Gates Foundation of which Mr. Gates is a co-chair is deeply involved in supporting health and agriculture in Ethiopia. “The other sector in which the foundation does a lot but haven’t done much in Ethiopia is finance about which we are having discussions with the government” said Mr. Gates. 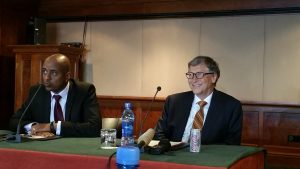 Asked by Addis Standard if the foundation sees any possible way of leveraging governments in its involvement in African countries where there are deficits in political freedom, Gates maintained that notwithstanding the political or security environment they try to reach people in need through short term humanitarian aid as well as long term developmental assistances.

Mr. Gates whose visit to Ethiopia came after participating in the 21st World AIDS summit held in South Africa commented the significance of internet and the free flow of information for development. “It’s obvious that the internet and information technology contributes much to development,” he says, in the light of almost a week of social media shut down in Ethiopia. “But it’s up to each country to decide on the rules regarding pornography, hate speech, what is allowed and what is not.”

Mr. Gate’s visit to Ethiopia came after participating in the 21st World AIDS summit held in South Africa this week.

Exclusive interview: After deadly protests in Gondar what should the government do next?