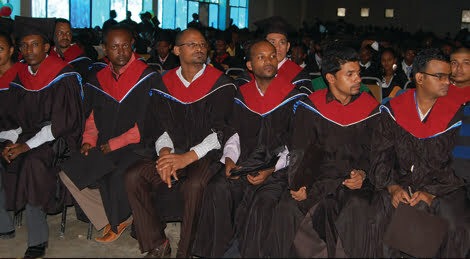 50, 000 Ethiopian graduates have just joined the search for the job market. Majority of them will not be employed soon and a good number of them are may be unemployable at all

Tekeste Amaha is one of the 50, 000-odd undergraduates this year only from the 31 public universities spread nationwide. Tekeste was graduating from the main campus of the Addis Ababa University (AAU) and one of the hundreds of his batches who were frustrated to see a statement that says “If others don’t employ you, it’s alright you can do that for yourself!” written in bold in one of the brochures distributed during the graduation ceremony last July. That the fate of self-employment awaits him and thousands of other graduates by itself should not as a frustration, but that it came as a last minute surprise is; Tekeste believed once he was done studying he would get a good job and a better life. Alas. That seems unlikely to happen anytime soon.

Too many to employ

As any economist would reckon, the economy in Ethiopia has been growing on average between 5-11% annually (depending on who is doing the math) during the last seven consecutive fiscal years.  Along with that is the undeniably significant number of jobs that have been created particularly by the private sector.  The Ministry of Urban Development claims the private sector have so far created jobs for more than one million Ethiopians throughout the country.

However the staggering number of unemployed educated youths means even such large number of jobs created so far fall short of satisfying the ever more growing number of job seekers. And the Ministry couldn’t say if that trend could be sustained for long either.

According to the International Labor Organization (ILO) currently urban youth unemployment in Ethiopia stands at an appalling 40%.  Terrifyingly many of these young Ethiopians who are out of the job market are not only unemployed, but also unemployable due mostly to the poor level of education they have received.

Job market experts believe that weak private institutions are not the only current causes of unemployment in Ethiopia, but a disproportional supply both in quantity and quality of labor particularly in urban areas.  Such supply of labor force is increasing in Ethiopia as a result of three major factors.

The first is the high level of migration from rural to urban areas. It is not unusual to see hundreds of able-bodied young Ethiopians streaming everyday in to urban areas mainly to the capital Addis Ababa hoping to secure decent jobs.

The second is the safe assumption of the relationship between unparalleled population growth and availability of jobs. Already with an estimated population of more than 80 million, Ethiopia’s population is believed to continue growing between 2.6% – 2.8% annually, making the country the second most populous in sub-Saharan Africa, next to Nigeria.

Thirdly – and this is the most important factor – the rapid expansion of educational institutions which are more concerned in the quantity of future job seekers and not, as it stands today, in the quality of their education. Currently Ethiopia has 31 state universities throughout the country most of which were built in the last half a decade.  This year alone, these universities have released 50,000 graduates with first and second degrees. Although no substantial research could be found, 50, 000 ‘skilled’ manpower at once is too big of a number for both the private and state institutions to absorb. Ordinarily in a country where there is low human capital, high number of graduates should not come as a big headache, but in reality the economy in Ethiopia is not at that spongy level where every release from universities of a ready-made human power could have a safe landing. According to World Bank’s 2008/09 Africa Development Indicators, 81.4% of youths and 43% of adults in Ethiopia worked in the informal sector of which 12.5% of the youth and 49.6% of the adults were self-employed.

“Mismatch of education and training skills with the requirements of the labor market is another important reason for the high level of youth unemployment in Ethiopia,” wrote Getinet Haile of University of Westminster, in his research entitled the “Incidence of youth unemployment in urban Ethiopia”, as far back as 2003. Ethiopia’s outdated curriculum in the education system, which is ranked as the one of the worst in the world, has resulted in lack of employable skills. “Expansion in education and training opportunities, barring quality problems, is an achievement in its own merit…nonetheless, uncoordinated and supply driven expansion in education and training may amount to the creation of an army of dissatisfied youth in the end,” said Getinet.

Albeit to a lesser extent recently, recruitment culture has also its own share of the blame. Employers’ tendency of ignoring young graduates and their obsession with five plus years of work experience appears for many young graduates terrifyingly intimidating.

For a society like that of Ethiopia’s, unemployment entails costs not only to the unemployed, but to the family (sometimes extended) and the society at large.  Tekeste Amaha is not only desperate to have his personal ends met, but to support his family too, as is expected of him.

The African Development Bank sees this unfortunate trend form a broader perspective (and rightly) when it says, “the potential consequences of the tension between an increasing output of educated and trained young people and the limited absorptive capacities of labor markets have been illustrated by the recent wave of discontent sweeping North Africa”.

More than 30 die in Ethnic clashes in southern Ethiopia