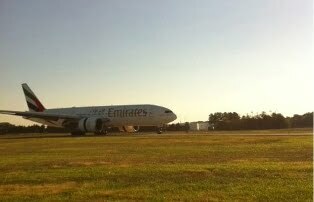 Emirates, one of the fastest growing airlines in the world, has launched its daily non-stop service from Dubai to Washington Dulles International Airport (IAD). It is the seventh gateway for Emirates in the United States, and the twelfth new route to join the airline’s international network in 2012.

“Emirates offers important new choice, competition and a higher level of internationally recognized service to the Washington, DC market with a state-of-the-art product and fleet,” said Tim Clark, President of Emirates Airline. “As one of the most important global cities in the world, we look forward to connecting DC-area travelers with the largest number of one-stop flights to Africa, the Indian Subcontinent, the Middle East and Southeast Asia.”

Washington Dulles is one of the top international airports in the U.S., with over seven million international passengers annually. The region is home to more than 1,000 international institutions and over 1,000 foreign-owned companies from approximately 50 countries. With 126 destinations in 74 countries, Emirates’ Dulles service will create a wide range of new options for passengers and businesses.

“Our U.S. flights help to open new markets that the business community is reliant upon, as the globalization of commerce is dependent upon transportation for passengers and cargo,” continued Mr Clark. “This Emirates service will facilitate trade and promote tourism to the Capital region from around the world, including the Middle East, which generated over 100,000 visitors last year alone.”

“We welcome Emirates as our 23rd international airline to Washington Dulles

International Airport,” said John E. Potter, President and CEO of the Metropolitan Washington Airports Authority. “This year, as we celebrate the 50th anniversary of the airport, the arrival of Emirates is cause for even greater celebration. Our passengers will benefit from this new service to the Middle East and connections to destinations around the globe.”

Emirates has expanded its U.S. presence significantly since launching service between Dubai and New York City in 2004. The airline now flies to Houston, Los Angeles, San Francisco, Dallas, Seattle and Washington DC, with the latter three destinations all added in 2012.

The airline has also appointed a new Senior Vice President to head up its commercial operations for the Americas. Orhan Abbas took up his role as Senior Vice President, Commercial Operations, The Americas, last month. He was previously Vice President for India and Nepal, overseeing a period of sustained expansion which saw Emirates more than double the number of services to the sub-continent in just four years.

“The Americas is a strategically important market for Emirates, a fact underpinned by our recent period of significant growth,” said Mr Abbas. “I look forward to the challenge of consolidating this expansion whilst continuing to seek new ways of developing our service offering across the continent.”

Customers travelling to Washington, DC will be able to connect seamlessly from points across the Far and Middle East, Indian sub-continent and Africa via the airline’s state-of-the-art hub in Dubai.