Addis Abeba Nov. 16, 2016 – Ten European tourists who were traveling through a famous tourist destination in southwestern Ethiopia were attacked last week on Monday, November 07. The attack has left one of the four local drivers dead and one tourist lightly injured, the Amharic Deutsch Welle radio reported yesterday.

The report said that the ten tourists, six from Slovakia and four from the Czech Republic, were traveling in four cars rented from Lemlemituwa Hagere Tour and Travel agency in Addis Abeba.

Quoting Ľuboš Fellner, co-owner and director of Bubo Travel Agency in Bratislava, the capital of Slovakia, which coordinated the travel, the report said that the ten tourists were attacked shortly after they have left a lunch break in Mizan Teferi, an administrative center of the Bench Maji Zone in Southern Nations, Nationalities and Peoples Region (SNNPR), some 565 km southwest of the capital Addis Abeba.

Irena Valentová, a spokesperson from the ministry of foreign affairs of the Czech Republic also confirmed the news and said the tourists were attacked by a group of six armed men from the Surma tribe. The attack happened when the four cars arrived in Surma Woreda, one of the Woredas which is part of the Bench Maji Zone.  She said the motives were not clearly known but it is likely to be a robbery; the perpetrators have taken cash and credit cards from the tourists.

According to Mr. Fellner, “after lunch break [in Mizan Teferi], the tourists have left for Surma woreda. They were stopped by armed men who came out of a forest and were robbed.” Some of the armed men have also attacked the car in the front by throwing stones, injuring one of the tourists inside the car.  One of the drivers has left his car and was shot by the armed men, according to Mr. Fellner, who further said that according to information from one of the tourists, the local driver has died of his injuries on the spot.

The tourists, all them above 50 years, were taken to Jimma and were subsequently flown to Addis Abeba, from where they flew to Vienna, Austria, according to the news.  Getnet Yigeza, public relations director at the Ethiopia Tourism Organization confirmed the news; he also said the driver’s body was taken to Addis Abeba for further autopsy. But he denied reports that the armed men were from the Surma tribe saying investigations were underway to apprehend the unknown perpetrators. 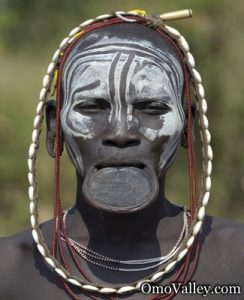 The Surma tribes (also known as Suri) are known for their exotic tradition partly characterized by lip plates that are made out of clay and worn by the women. Surma woreda is bordered on the south and west by South Sudan, on the northwest by the Gambela Region. Part of the Omo National Park, a famous tourist attraction, extends into the southern part of the Surma woreda.

The incident comes as bad news to Ethiopia’s tourism industry, which is hard hit by year-long anti-government protests which rocked most parts of the country in Oromia and in Amhara regional states, prompting the government to declare a six-month state of emergency.  Several countries, including the Czech Republic, have issued travel warnings to their citizens.

On Friday Nov. 11, the BBC reported that income from Ethiopia’s tourism sector “had fallen by more than $7m (£5.5m) over the last quarter alone, forcing the government [to] revise its targets.” AS