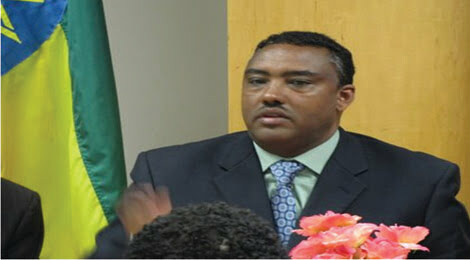 The same meeting also elected Demeke Mekonnen, currently the Minister of Education, as Deputy Chairman of the party in its last day deliberations today  Sep. 15th .

According to a statement released by the Council the first day meeting “discussed and approved the draft agenda proposed for the discussion. One of the agendum is entitled ‘let us strive to realize the visions of Meles/EPRDF by ensuring the practical sovereignty of the developmental democratic outlook’. ”

The meeting, which was off limits both to the private and state media alike, also discussed  “building the leadership and the stride of the renaissance,” a topic that was  “prepared and discussed on by the Executive Committee earlier, in the presence of the great leader.” the Council said.

According to an inside information obtained by Addis Standard, participants have  also intensively discussed on the future of the party after the unexpected departure of the late PM Meles.  “Some of the participants wanted the election of the party chairman and the deputy to be the first agenda, but many of us believed that was not the most important of all but issues to do with the party and its future as well as our concern on how to carry on the legacies of our dear leader who departed from us too soon,” said a source who would not like to be named.

Other than the issues mentioned by the official statement of the Council, the meeting has also discussed on the progress of the Growth and Transformation Plan (GTP), a five year plan launched by the late PM Meles, and its future.

The election of Hailemariam Desalegn today brought to an end weeks of speculations about power struggles that was believed  to have caused the delay in replacing the late PM both as the prime minister and chairman of the party. But our source denounced the existence of power struggle from within. “There is nothing to suggest such thing. Our struggle is making sure the continuity of the team spirit and the leadership quality that our great leader left behind.”

Hailemariam Desalgn, who is from the South Ethiopian Peoples’ Democratic Movement (SEPDM), will be the first non-Tigrayan member to lead the party. He is also the first person to hold the position without having been a part of the guerilla fighters that toppled the Derg regime in 1991. The late Meles Zenawi was the chairman of the party for the past 21 years.

There is little information available on Hailemariam’s deputy Demeke Mekonnen. However, prior to his appointment as the Minister of Education in 2010, Demeke was the Commissioner of Ethics & Anti-Corruption Commission in Amhara Region. He was also the head of the region’s Administrative & Security Affairs Bureau. Between 2005 – 2008, he served as the Vice President and Head of Capacity Building Bureau of the Region. He was then promoted to the position of State Minister of Education in 2008 where he served until 2010 and was promoted to the ministerial position in 2010. He is a member of the executive committee of the ruling EPRDF and ENDM and was elected as a member of the House of People’s Representatives in May 2010.

According the party’s tradition, the party chairman will be automatically the next Prime Minister of the country. However, the national parliament has to approve the decision by the council, which has 180 members assigned equally from member organizations, and which serves as the highest authority of the Front between two successive congresses.

The national parliament, in recess since late July, was to summon for an emergency session on Thursday August 23nd following the announcement of the death of the late PM Meles but it was called off until further notice, fueling speculations that the party was locked in internal power struggle.

The national legislative body is expected to reconvene in the last Monday of September. Approving Hailemariam’s premiership is expected to be the top agenda.