Interview: They were even terrified to hear that the title of my book included the name Maekelawi: Solomon Kebede

Solomon Kebede was detained by the government and charged with multiple terrorism charges when he was working as a managing editor of Yemuslimoch Guday (Muslim’s Affairs), the only surviving Muslim affairs oriented magazine up until the beginning of 2013. His arrest resulted in the closure of the magazine. After serving three years and three months in two of Ethiopia’s notorious prisons, Mae’kelawi and Qilonto, Solomon was freed on 13th of April 2016.

During his stay in prisons Solomon said he had experienced things he “wouldn’t imagine to [experience] anywhere else in the world.” Hoping to shed light on his unfortunate prison experience he has recently published  a book titled “From Ma’ekelawi to Qilinto,” which is named after the two prisons he had been to. He says he is also planning on writing part-two of his prison memoir.

Addis Standard interviewed Solomon about his new book, the magazine he used to work for, his prison experiences and more.

Addis Standard – You were detained on January 17 2013 in the midst of the ongoing crackdown against Muslims in Ethiopia. Can you briefly walk us through what happened during and after your detention?

Solomon Kebede – I was detained while I was going to my office. An hour after my detention, I was taken back to my home; my home was searched. The police took some books, magazines and my laptop. Then they took me back to Mae’kelawi.

The next I was brought to a court, where the detective presented the case. He accused me of organizing protests against the government, storing weapons, recruiting and training fighters as well as writing and publishing materials that incite violence in order to overthrow the government.

AS: You recently published your prison memoir titled “From Ma’ekelawi to Qilinto”, two of the notorious prisons in Ethiopia. You talked about the difficulties you had in finding publishing houses. How did that affect you?

I wrote many of the articles while I was in prison. I used to think that it would be easier to publish it as long as the contents did not violate the law. However, I was mistaken to think that way. It has taken me almost a year to get a publishing house. Many of the managers and the owners of the main publishing houses, whom we talked to, have been in a state of terror. They were even terrified to hear that the title of my book included the name ‘Maekelawi’. Even after they read the manuscript and understood that publishing it will not have any legal consequence, they weren’t willing to publish it.

This is very disturbing. If people don’t have confidence in what they do, if they feel vulnerable even though the law is with them, if they respect authorities more than the law, it is really disturbing.

AS: Obviously, we don’t want to give away the contents of your book, but can you please share with us which part of the book was too difficult to overcome in terms of the memories you had to walk back through your prison experiences?

The most difficult one was the part that talks about our justice system. If you refer to various scholars’ propositions for pillars of democracy, you will get varied ideas. However, every one of them agrees that justice is one of the pillars. There is also a strong link between justice and prosperity. Justice is an essential means of achieving prosperity. It is the base for the well being of a society. If the justice system of a country is corrupted, the whole system in the country will not be able to function in a healthy way.

AS: What do you think will be the impact of your book? And why?

Based on the feedback I received from people who read the book, I can say that it has created a significant awareness among few people who could be taken as main actors in the justice system. [These] feedback came from few people, but they are among the main actors in the justice system. I expect the few will grow to a noteworthy size. I hope it will also have an impact on the way our prisons handle detainees.

Even though we were left with very few members, we were determined to continue our job. At the time I was detained, we were about to publish the next issue. However, with my detention in January 2013, the magazine ceased to exist. We believe that the crackdown on our magazine and the arrests of our staff members were linked with our coverage of the alleged Ministry of Federal Affairs’ interference in religious matters and the weekly demonstrations held by the Muslim community.

AS: Ever since the imprisonment of you and your colleague, Yusuf Getachew, who was the chief editor of “Yemuslimoch Guday” has there been any other magazine similar to yours?

No. Prior to 2012, there were around seven print media outlets. However, since 2012 there hasn’t been any significant print media focusing on the Muslim society.

AS: But Muslims constitute more than 33% of Ethiopia’s population. What’s the status of media currently focusing and/or addressing the socio-political as well as religious dynamics within this significant portion of our community?

Currently there is only one television channel that is based in Sudan. The channel focuses only on religious issues. There is no single media that addresses the socio-political dynamics.

AS: Do you think this is acceptable? If not, what do you think should be done?

It is not acceptable at all. The problem might be worse when it comes to the Muslim society. But there is a wide-ranging challenge regarding the private media in general. Ethiopia’s media environment is one of the most restrictive even by sub-Saharan Africa standards.  We have witnessed arbitrary trials and convictions which have a great impact in silencing the media.

No one doubts the media’s crucial role in national development. Media act as the gatekeeper of public issues. However, if the environment is restrictive as in the case of Ethiopia, the country loses a great deal. Therefore, if we are serious about ensuring and improving the quality of life in our society, we all should strive to create a conducive environment for the private media to thrive. Journalists on their part should build their capacity. The relationship between the government and the private media should be improved. The government should fulfill its responsibility of protecting press freedom.

It should start by amending some of the draconian laws. Studies show that private media have disappeared  after the adoption of the anti-terrorism proclamation. The scary nature of its provisions and the way the proclamation is being enforced have resulted to a heightened form of self-censorship among journalists to the level that they are incapable of carrying out their professional activities. Therefore, the problematic areas of the law should be amended to avoid its ill-effects on freedom of expression and media freedom. 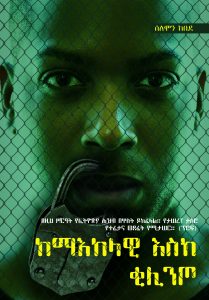 AS: How did your prison experience shape or change who you are today? And what is next for you?

In Ethiopia, a federal prison is a melting pot where you find every sector of the society from all corners of the country. In a single room, you might get from 150-400 prisoners. Among these prisoners, there are intellectuals as well as laymen. There are serial criminals as well as innocent people. There are teenagers as well as old men above 80. There are also the mentally ill, severely sick as well as very healthy people.

Living in such a situation for years gives you a distinct experience you wouldn’t imagine to get anywhere else in the world. It shapes you in a way you could live in harmony with people of different religious, social and political background. It teaches you what a real tolerance is.

In fact, it also has its own hardships but you realize that ‘what doesn’t kill you makes you stronger’.  Finally when you are released you will be stronger but more careful. But above all, you will cherish the most invaluable thing in the world, the spirit of freedom.

After my release, I tried to reopen our magazine but we were asked to pay a penalty of 96,600 birr [US$ 3,578.00] for not reporting the monthly vat. We presented our case that we didn’t report because we were in prison. But the case was not accepted. So currently my focus is on writing part two of my prison memoir.