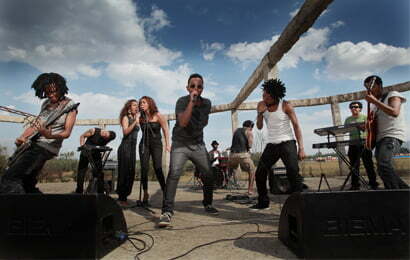 The man behind the making of Jano is Addis Gassesse, a renowned Ethiopian music manager who shuttles between Addis Abeba, New York and Kingston, Jamaica. Now Addis wants to get Jano play at international concerts and compete with any rock band on the world stage.

As the manager of the Marley family for over 23 years, starting with Ziggy Marley, and the Melody Makers growing up on his watch, just like Steve and Damieon Marley did, and adding more recently Ejigayehu Shibabaw, popularly known as Gigi, who is one of the most successful contemporary Ethiopian singers worldwide, and Tewdros Kassahun, a.k.a Teddy Afro, Ethiopia’s pop sensation, to his profile, Addis Gassesse feels he can do the same with Jano, giving them the training they need to help them survive the music business out there.

The first ever rock band

A number of music critiques lament Ethiopian music as something that has “stuck in the past”. But with Jano Addis’s instinct and energy is up for something high.

Having listened to the preview of a soon-to-be launched ten track debut album entitled “Ertale”, named after a place in Eastern Ethiopia where a volcano comes to an extraordinary active lava, one could easily get the sense of Addis’s vision. Jano’s tempo is nothing like Ethiopian music as we know it. It audaciously breaks the rules of the familiar melody to

bring about a new rocking sensation.

Jano has a unique way of showing the flare of its members, who, some of them came from different gospel choirs. The fusion of Ethiopian music with Rock is a complete detachment from the long tradition of music norm. But the songs are partly written by the band members themselves and partly by Yilma Gabreab, a popular Ethiopian song writer. The result is the first ever rock band in Ethiopia.

While some of the band members have been heavily influenced by rock stars such as the Rolling Stones and Metallica, others have been influenced by jazz, pop and reggae. This diverse background of the members can be clearly seen in the unique sound of their music that takes its nuances from an eclectic assortment of styles that, deep down, didn’t abandon an Ethiopian flavor.

The audio and video of “Ayrak” a single track from the upcoming debut album “Ertale” have quickly become popular on most FM radio and a few state owned TV stations in Ethiopia. Organizers said the aim of this premiere was to launch the new sound of the new band to the Ethiopian audience. A Youtube version of the video has also generated many hits.

In an interview with this magazine, lead guitarist Michael Hailu said, “Rock is already a very aggressive and outrageous sound so we are trying to get the ears of the crowd by bringing this unknown sound from the melodies we created.”

Sponsored by Ermiyas Amelga, an Ethiopian business tycoon who says the money (around 1.3 million birr so far) he spent in the making of Jano was “all worth it,” rehearsals of the group involved a whole year of practicing together, with up to eight hours daily. Each of the band members were handpicked by Addis Gessesse, who invests part of the money to make Jano happen.

Passionate about their vision, they have seen each other and themselves improving with the training and focus on their one destination – to take Ethiopian music to a world standard. Vocalist Hewan Geberwold confirmed that when she told this magazine, “we want to be known to the world not just for championing in athletics but for our achievement in music with the Jano sound”. 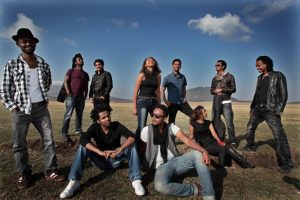 The making of Jano has seen its manager Addis bringing in and working together with music producers and stage engineers from the US, most notably Bill Laswell, a prolific music producer who is involved in the makings of hundreds of recordings with many collaborators from all over the world. Laswell has now his recognizable signature in the upcoming Jano’s debut album “Ertale”.

So far Jano band had two gigs: last April at the Sheraton Addis and last month at Club H20. Both gigs have already captured the hearts and minds of many party goers who showered them with standing ovations for their free styles, explosive rhythms and captivating lyrics. Although the band has gotten way too better during the second gig than the first, there was something distinctive about both gigs: a stress-free resonance that united in dance every audience who has otherwise a different taste from different genres of music.

Starting from mid-December this year Jano is set to begin a worldwide tour covering Sunsplash in Jamaica, Japan, Australia, New Zealand, Brazil, England, and USA with a return concert planned in as many African states. “The whole process takes time and they will have to grow into it”, Addis told this magazine, “I can say this with full confidence that in five years time they will be the hottest band on the planet.”

Before the big take off to the outside world though plans are underway for a November countrywide concert starting from Addis Ababa, covering regional cities including Bahir Dar, Dessie, Jimma and Arba Minch to introduce the unique sound of Jano nationally.

Without doubt many Ethiopians will agree that Jano has added something new and exciting to the music industry in Ethiopia and managed to produce a made-in-Ethiopia pulse for the consumption of the global audience.