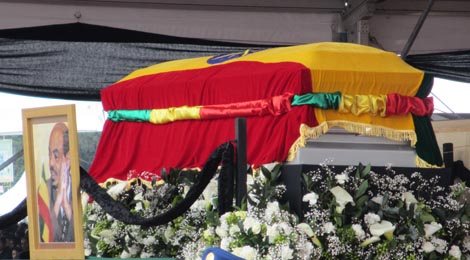 As a lengthy national mourning period came to an end today thousands of Ethiopians, more than a dozen African serving and former heads of state, U.S and EU diplomats and leading business people including Bill Gates and Nigeria’s self-made billionaire Aliko Dangote, and other prominent people from around the world gathered at Meskel Square to pay their last respect to the late Prime Minister Meles Zenawi, who died of a sudden infection from an unspecified illness on August 20th.

A spectacular show was held by the Guard of Honor from the national Defense Force.  It was followed by different shows by members of the air force, the federal police and the special commando unit among others that adorned the first state funeral in contemporary Ethiopia. 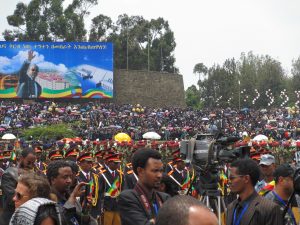 Thousands of Ethiopians attended the state funeral ceremony while the program was transmitted live through the national TV and via big screens erected throughout Addis and major cities.

The body of the late premier arrived at Meskel Square carried by a horse carriage dressed in black. It was then laid into a special tribune carried by a dozen senior army generals including military Chief of Staff General Samora Yenus. Meles Was the Commander-in-Chief of the army.

Since the official announcement of the death of PM Meles on August 21st, the country has been observing a nationwide mourning. This was in the backdrop a vacuum for an immediate power transition.

Hailemariam Desalegn, Deputy Prime Minister and Minister of Foreign Affairs assured the gathering by pledging the government will be back to business “as of tomorrow.” “I would reassure you that the [ruling] EPRDF and our developmental and democratic state will immediately act to implement all the policies and strategies, including those of the Growth and Transformation Plan,” he said.

Although Ethiopian constitution has no clear provision on succession of power in the case of death or incapacitation, Hailemariam is highly tipped to become the next PM. But the national parliament hasn’t officially sworn him in yet. 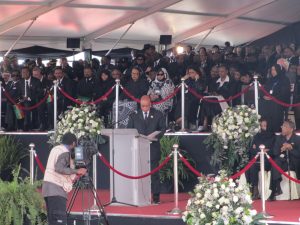 South Africa’s Jacob Zuma said Meles represented Africa and negotiated with international powerful nations “not only due to the size of his country but the size of his ideas.”

Boni Yaya, President of Benin and current chairman of the AU said the late premier possessed a great “personality, charisma and ambition” while Uganda’s Yoweri Museveni said if his party carried on the vision the late premier started, “he would not have suffered in vain.”   He called Meles ‘Okunyika,’ in his native language to indicate that he was leaving behind grown up kids and a matured party and therefore his death wasn’t in vain.

He “was a great son of Ethiopia but also ours as a continent,” said Paul Kagame of Rwanda, “his was a life of eminence, courage, and vision.”  South Africa’s Jacob Zuma paid his deep respect for the late Premier when he said Meles represented Africa and negotiated with international powerful nations “not only due to the size of his country but the size of his ideas.”

South Sudan’s Salva Kirr, whose country locked horns with the Sudan soon after independence, said Meles was instrumental in peace negotiations both before and after his country declared it’s independence from the Sudan. “He was one who can’t give up even in the face of challenges,” Mr. Kirr said. The late Premier was the only person both Mr. Kirr and Sudan’s president Al-Bashir, who also spoke but only in Arabic, trusted.

“Tribute to the giant Meles Zenawi” was what former South African President and a close friend Thabo Mbeki said. “He was younger than me but it never occurred to me that he was younger,” he said attributing his assertion to the “brilliant and analytical” mind of the late premier. 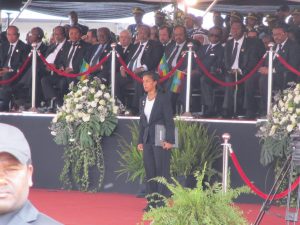 The most emotional tribute came from the two women who spoke: U.S Ambassador to the U.N Susan Rice and the widow of the late premier Azeb Mesfin. Mrs. Rice regretted the untimely death of Meles “when he still has so much to give.” “Our shared grief is palpable,” she said. She praised him for being “disarmingly regular,” and for having a “wicked sense of humor.”But above all was his world class mind.” Mrs. Rice said she had a good personal relationship with the later PM, who “no matter how beset he was,” would always ask her how her children were doing and not in “superficial” way.  The late premier’s widow Mrs. Azeb broke into tears for every sentence Mrs. Rice spoke.

For his widow Azeb he was “a husband, a childhood lover, a father of her three children, and her boss.” “This is the saddest day of my life”, she said. She praised her kids who “left their father alone when he needed time.”

Azeb, who came in with the body, was more of a traditional mother and a wife than a politician when she cried unable to control her movements.

Invited guests, cabinet ministers, Ethiopian Ambassadors and prominent business people, artists and private individuals were all draped in black, Ethiopia’s traditional mourning attire. Most were openly sobbing throughout the procession.

After the ceremony in Meskel Square, the body of the late primer was carried away to the Holy Trinity in the same manner it came in. It was laid to rest amidst a drenching rain that started when leaders began to pay their last tribute before departure.