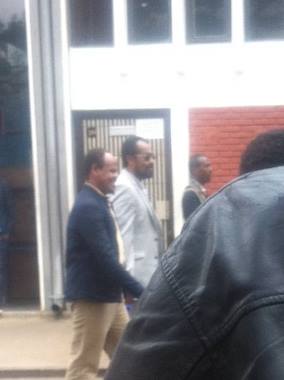 The case is adjourned because prosecutors have failed to bring to the court their witnesses. In addition five of the 22 defendants were not brought to the court. Prosecutors told the court that four of the five, Gelana Negera, Gemmechu Shanqo, Dereje Merga, and Firomsa Abdissa were either in Showa Robit, or Ziway, two notorious prison facilities located 200km north-east and 180km south-west  of the capital Addis Abeba respectively.

However, neither the prosecutors nor defense lawyers know the whereabouts of the fifth defendant, Chimsa Abdessa Jafero (Known also by his nick name Dejene Abdessa). There are growing fears on the safety of defendants after a fire ravaged the Qilinto prison, where they are held. An independent investigation by Ethiopia Human Rights Project revealed that 67 prisoners have died during the Qilinto fire in the first week of Sep this year. Out of the 67, 45 were killed by security officers on duty, according to the report. The government maintained 23 were killed, two of them by security forces while “trying to escape.” Many of the estimated 3, 000 inmates at the prison were relocated to several other prison facilities throughout the country. However, it is known that Bekele Gerba and the rest of his co-defendants are still held inside Qilinto.

The 22 detainees who are charged under various articles of Ethiopia’s Anti-Terrorism Proclamation (ATP) include Bekele Gerba and Dejene Fita Geleta, first secretary general and secretary general of the opposition Oromo Federalist Congress (OFC). All of them were arrested between November and December 2015, shortly after the start (and in connection with) Oromo protests in November. Defendants include several members of OFC, students and civil servants who came from various parts of the Oromia regional state.

In April 2016, prosecutors have charged the 22 with various articles of the ATP. The charges include, but not limited to, alleged membership of the banned Oromo Liberation Front (OLF), public incitement, encouraging violence, as well as causing the death of innocent civilians and property destructions in cities such as Ambo and Adama, 120km west and 100km east of Addis Abeba, during the recent Oromo protests in Ethiopia.

Subsequently all defendants have lost their preliminary objection appeals and are now defending their cases at the federal high court.