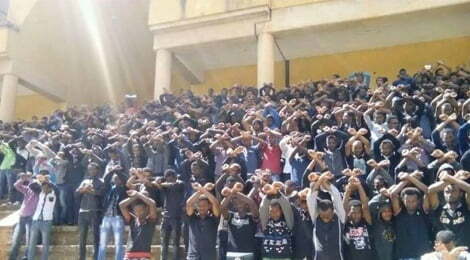 The State Department’s Bureau of Democracy, Human Rights and Labor released the latest country report including for Ethiopia on April 13, 2016.

Much to its usual details, the Ethiopia report identified harassment and intimidation against opposition members and supporters as well as journalists in Ethiopia; it also alleged torture, beating, abuse, and mistreatment of detainees by security forces and politically motivated trials as “the most significant human rights problems” in the country.

The report itemizes other human rights abuses including “alleged arbitrary killings; harsh and at times life-threatening prison conditions; arbitrary arrest and detention; detention without charge and lengthy pretrial detention; a weak, overburdened judiciary subject to political influence;”as well as “the infringement on citizens’ privacy rights, including illegal searches; restrictions on freedom of expression, including continued restrictions on print media and the internet, assembly, association, and movement;”and “restrictions on academic freedom; interference in religious affairs; restrictions on activities of civil society and NGOs.”It also states citizens’ “limited ability to change their government” and the prevalence “police, administrative, and judicial corruption.”

Particularly problematic is, according to the report, government officials’ impunity as, besides some reported exceptions, the government “generally did not take steps to prosecute or otherwise punish officials who committed abuses other than corruption.”

According to the report, “members of the security forces reportedly committed arbitrary or unlawful killings.” Between the end of the campaign for the 2015 general election in May to the announcement of results the next month, “opposition parties reported the death of six party members, including one candidate from the Blue Party. The deaths occurred in the Southern Nations, Nationalities, and Peoples’ Region (SNNPR); Oromia; Amhara; and Tigray,” maintains the report.

The report further said in Gambella, the death of 126 police and civilians was reported on October 2014 due to clashes that occurred between a group of ethnic Majanger and Ethiopian national and local security forces. In December 2014 officials charged at least 46 individuals, including officials from the Gambella regional government, with terrorist acts, and they were on trial at year’s end charged under the Anti-Terrorism Proclamation (ATP).

Torture and inhuman or degrading treatments and punishments have been reported even though the Ethiopian constitution and law prohibits such practices, maintains the report. “There were credible reports [that] police investigators used physical and psychological abuse to extract confessions in Maekelawi, the central police investigation headquarters in Addis Abeba,” while “prison and pretrial detention center conditions remained harsh and in some cases life threatening.”

Contrary to the country’s law which provides for an independent judiciary, and although the civil courts operated with a large degree of independence, “the criminal courts remained weak, overburdened, and subject to political influence.”

Shading light on the problem of freedom of expression, the report underscores that “authorities harassed, arrested, detained, charged, and prosecuted journalists and other persons whom they perceived as critical of the government, creating an environment where self-censorship negatively affected freedom of speech.”Mostly employing the infamous ATP, the government continued to arrest, harass, and prosecute journalists. Meanwhile independent journalists continued facing logistical challenges to use government printing presses and access to private printing presses was scarce to nonexistent.

While the government muzzles internet freedom by periodically restricting access to certain content on the internet and blocking websites, Citizen Lab, a Canadian research center at the University of Toronto, identified Ethiopia as one of the 25 countries hosting servers linked to FinFisher surveillance software.

Another aspect of civil liberty the report chooses to focus on is academic freedom. The government restricted academic freedom, including through decisions on student enrollment, teachers’ appointments, and curricula, the report said. “Authorities frequently restricted speech, expression, and assembly on university and high school campuses” while “The ruling party, via the Ministry of Education, continued to give preference to students loyal to the party in assignments to postgraduate programs.”

There are also “numerous reported cases of government denial of freedom of assembly” as “regional governments, including the Addis Abeba regional administration, were reluctant to grant permits or provide security for large meetings.”

The report also discusses freedom of movement, participation of women and minorities, corruption and lack of government transparency, as well as discriminations and societal abuses.

Missing details on the #OromoProtests angers many

The report said there were many reports of arbitrary arrest and detention by police and security forces throughout the country, including the detention of seven pastoralist and community leaders at Bole International Airport en route to participate in an agricultural workshop in Nairobi on March; the extrajudicial and arbitrary detentions of opposition party members in the run up to the election; and reports of “thousands of extrajudicial and arbitrary detentions” as #Oromoprotests continued for months.

However, the report’s minimal attention to the recent #Oromoprotests, which began on November 12 and continued through today – although to a lesser extent, has angered several activists and campaigners. Although unconfirmed reports put the number of people killed by security forces to more than 400 during the last five months of civil disobedient by the Oromo, the report scarcely mentioned protests have “spread to small towns and villages across the Region” and “Some of the protests escalated into violent clashes between protesters and security forces, which allegedly used excessive force, resulting in dozens of deaths, including protesters and police officers.”

“I honestly expected the U.S. Department of State to at least report on the ongoing ‪#‎OromoProtests, now in its fifth month, including the hundreds of killings, mass arrests, wholesale eviction and dispossession of the Oromo people off their land and natural resources in Ethiopia in its yearly human rights report, however meaningless and useless the Report is,” wrote Berhanemeskel Abebe Segni, a prominent Oromo scholar and activist, on his facebook page.  “I expected the leadership of the United States on this issue, in part, assuming the Oromo people’s security, political and economic interests are crosscutting [the] shared national security and economic interests of both Ethiopia and the United States,” Berhanemeskel expressed his frustration.

Perhaps partly due to that, unlike other times, the report has so far created little buzz within the social media space amongst Ethiopians.