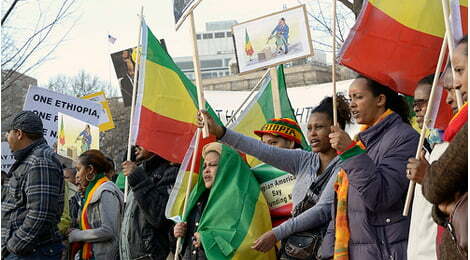 A legacy of unhappy Diaspora

On May 28th 1991, following the control by members of the Tigray People Liberation Front (TPLF) of Ethiopia, millions of Ethiopians in and outside of the country rejoiced in unison. After 17 years of civil war that killed thousands of Ethiopians and forced hundreds of women to become single mothers, there was no better news for everyone than the architect of the sheer terror Ethiopians had to endure for 17 years was finally down.

The downfall of the Derg, the communist regime responsible for the death of thousands of Ethiopian young (and mostly educated) men and women during its “Red Terror” campaign, witnessed the first historical mass return to home by hundreds of Ethiopian Diaspora. Some had come to participate in what would for a few years become a political space charitable towards a multi-party system; others simply came to join family members they haven’t had a chance to see in years; while a few others packed up their luggage and made the journey of their lifetime to establish private businesses in the just liberalized economy.

The latter two remained, until today, possible. Hundreds of Ethiopians who used the opportunity to come home are engaged in various thriving private businesses. But for those who had hoped politics would be their destiny at home, beginning of July 1991 witnessed the first disappointing experience as the then transitional government led by President Meles Zenawi along with 27 other political factions unveiled a constitution that has an article advocating the right to secession (article 39 of the constitution). The two monumental milestones of the newly enacted constitution were the adoption of a free market economy and the establishment of a federated Ethiopia.

For many in the Diaspora, the idea of a free market economy was a huge leapfrog; but a federated Ethiopia signaled a recipe for a disastrous collapse of Ethiopia as a country. The historic gathering on July 1st 1991 also saw members of the Oromo Liberation Front (OLF) walk out in protest over some provisions of the charter. The OLF still remained a dissident political party with a considerable support from many Diaspora Ethiopians, but at home it has been constitutionally branded as a terrorist group.

Relations between some of the Diaspora Ethiopians and what would soon become the Ethiopian People Revolutionary Democracy (EPRDF), a coalition of four sister parties, that already started on the wrong foot got worse when Ethiopia gave Eritrea its independence in the April 1993 referendum. Five years later, and to the dislike of many Ethiopian Diasporas, Ethiopia and Eritrea got into a two year costly border war.

Most of the Ethiopian Diaspora didn’t come to good terms with the government in Ethiopia when in 2001 the infamous university students’ riot broke out. It was a real taste of democracy for the ruling EPRDF. Alas. Government forces took heavy handed measures against the rioting students who were demanding better conditions within the management of the University. They killed many of them and arrested those whom they didn’t kill. Add insult to injury, the government dismissed 40 professors from the Addis Ababa University, the epic center of the riot, accusing them of instigating the students to come out on the streets. Most of them ended up leaving their country.

A sizable number of the students also ended up in refugee camps in Kenya, where the UNHCR facilitated their departures to various parts of the world including the US and Europe.

Seeing a rare chance for a legitimate political engagement, the Ethiopian Diaspora became very active in the run to the historic but bloody election in 2005. In the EPRDF’s 15 years of history prior to the election, the unprecedented openness and the almost ready attitude for change encouraged many to participate and hope for a political space at home. It didn’t work and as the crackdown on almost everything that was not governmental intensified more and more journalists fled Ethiopia and joined the Diaspora club. They helped a disenchanted Ethiopian Diaspora swell both in number and voice all over the world.

Members of the opposition who were jailed and charged with high degrees of treason in the aftermath of the election also found it easy to associate their political parties with Diaspora Ethiopians where already most of the money for their activities was coming from, as the later helped become the missing link by using new media to organize anti government demonstrations, lobby members of the US congress and feed critical reports to the likes of Human Rights Watch.

The late Prime Minister Meles never saw anything legitimate in this and consistently characterized them as “usual offenders”, “extremists” and “anti-development” forces. After the 2005 disputed election, the government blocked access to various opposition websites run from outside of Ethiopia, and has charged a few members of Ethiopian Diasporas with treason in absentia.

The late Premier never managed to have a single tour abroad without facing demonstrating Ethiopians against his government. At home state media is keen to portray them as everything on the way of Ethiopia’s development. Last year during Ethiopian officials’ tour to the U.S. aimed at garnering support for the newly unveiled “Grand Ethiopian Renaissance Dam Project” – a rare and ambitious project that unified Ethiopians in all corners of the country – an anti government demonstration at a gathering called by the Ethiopian traveling diplomats exposed how bitter the relations between the two have become. The Ethiopian government played videos of the incident on the national TV as an apparent move to justify the wrongs some of these Diaspora Ethiopians have committed against its grand project.

Now the death of Prime Minister Meles Zenawi seemed to have further twisted the relationship between the two. Following the news the hope to see a better Ethiopia brought a sigh of relief to many members of Ethiopian Diaspora, but subsequently sent the wrong message to millions of grieving Ethiopians and the post Meles government.

Ed’s note: part of this article was published in May 2011 edition of Addis Standard.

Ghana’s late president - A mixed legacy but a stable nation