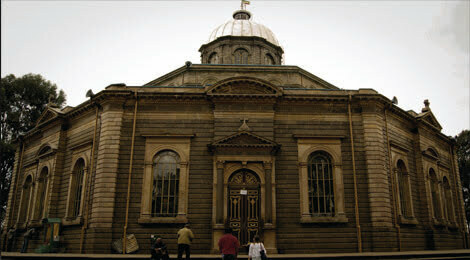 A difference made in preserving and protecting the past

Addis Ababa and Krakow
Addis Abeba, the capital of Ethiopia, is home to an old Ethnological Museum, obelisks such as Minelik II and Abune Petros, old historical churches like St. George in Piassa, open areas like the Meskel Square, Mexico square and the recent one, Ethio-china square. Ancient hospitals, hotels and theaters also exist in Addis Ababa.
Krakow in Poland, on the other hand, is home to a variety of breathtaking venues such as the Wawel Cathedral, the Church of the Virgin Mary, the Wawel Royal Castle and an Ethnographic museum to mention few.
The visible difference between these two cities comes to life when one visits each city. In Addis Ababa most of these historical places are not known and are ill preserved and the way by which they are protected and promoted is disappointing at best.
Take for example the old city of Arada, which is where Minilik the II and Abuna Petros monuments stand. A quick glance on both reveals there is hardly anything that signifies their history. Not to mention the site of a worrying dirt surrounding the in and out of the area. It is almost impossible to pass by there without holding one’s nose. The monument of Abuna Petros, who died a martyr’s death during the Italian occupation of Ethiopia in the 1930s, says nothing about his history, not to mention the lack of exact proof as to where the Italians buried him after he was killed, which should have otherwise been available on the spot for regular tourists and Ethiopians who are interested to know his history.
Unless it’s for historians who labour over scant archives of the history, nothing is available in the convenience of a regular visitor to the place. In a country that houses a ministry of culture and tourism, negligence in handling due history is inexcusable.
In Krakow, however, there is nothing that remotely looks like Addis Ababa. Not only are tourist attraction places well protected and preserved, there is an information overflow on each places that sometimes one feels simply overburdened by it.

History depending on who rules the country
When the Marxist- Derg came to power in 1974, its cadres destroyed monuments, changed names of schools, and had burned archives that bear resembles of the Monarchy they overthrew. Although to a lesser extent, the ruling EPRDF did the same notably by reducing to rubles of a giant monument dedicated to Lenin. Recently a journalist for the national television was seen interviewing street vendors to learn how they have saved copies of some of the books that were destroyed in the process.

The church of the Virgin Mary, Krakow

In contrary in Poland the history of its past, no matter how dark, is well preserved and protected.  Teaching the new generation a lesson from the ups and downs of the country’s past is taken very seriously.   Even gruesome reminders of a dark history like the Auschwitz Nazi concentration camp is kept and well taken care of, attracting thousands of tourists every year.
During a visit there, I threw a casual question at our guide on whether keeping some of these history won’t serve bring shame on today’s generation. She said their aim was to show the past and prevent similar historical slip-ups in the future.
True to her words the Salt Mine, a mining place with unflattering tales in the past, is now home to chapels, restaurants, museums, shopping centers and cinema houses and attracts more than 700,000 visitors from different parts of the world every year.
Like Ethiopia Poland has seen its share of political turmoil and had been ruled by tough communist regimes in the past, but unlike most historical places in Ethiopia, a difference made in preserving and protecting Poland’s history is deeply felt in every place one goes to.

And the winner is…