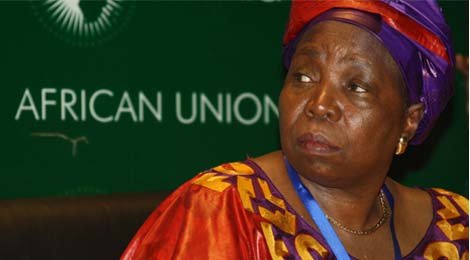 South Africa may consider this as a huge leap forward for its foreign diplomacy and the incoming Chairperson Dlamini-Zuma may take it as a chance to show the world the veteran, shrewd career politician that she is. But think twice her job is not enviable. Mrs. Dlamini-Zuma has two mountains to scale in the next four years: political and institutional.

Her bid for the seat had a rough start in January.  And for the next six months, it turned out to be one of the most divisive subject matters throughout the continent. For a starter, it locked her country South Africa and Nigeria, another giant in the continent, into a bitter rivalry to the point that the current AU Chairperson, President Boni Yayi, couldn’t conceal the fear that has gotten under his skin – the fear of another stalemate – when, in his opening speech on Sunday July 15th, he said “six month later, we should have the ability to unify the continent through this election.”

But unifying the continent, whose difference between the Franco and Anglophone linguistic and political fine lines widened ever since South Africa announced Mrs. Dlamini-Zuma’s candidature in the summer of 2011, has certainly  picked another level when President Goodluck Jonathan of Nigeria failed to show up for the summit.

President Jonathan may have been subjected to fierce criticisms at home over what many claim was his frequent travels abroad while Nigeria is confronted with increasing security threats from Boko Haram, acute poverty, and endemic corruption. But the truth is the six month waiting period since January has witnessed a heavy collision of diplomacy between South Africa, which failed to back down its candidacy as was widely expected, and Nigeria, which stuck to its support for the outgoing chairperson Jean Ping of Gabon.

Nigeria never appreciated South Africa’s lust for more power stretching from the Southern African Development Community (SADC) to the BRICS to the G20; not to mention President Jonathan’s personal apprehension over President Jacob Zuma’s indecency and snobbery to break the unwritten rule of the continent’s statesmen that prohibits the ‘big fives’ from vying to get the highest office. Now it’s Mrs. Dlamini-Zuma’s headache; if the AU needs to survive as a continental institution, it can hardly do it in the absence for its annual summit of its biggest member state whose President is at loggerheads with the country of its Chairperson.

Mrs. Dlamini-Zuma said she will “only be able to discharge” her responsibility by working “with all member states and the talent that exists” in the continent. She is right, but it gives no comfort that her first four year in the office may as well begin by redefining what should become “effective cooperation and collaboration with member states and the Regional Economic Communities (RECs)”, known to be the building blocks of the AU, when the term “effective integration” between the RECs was seen as the first casualty of the brawl between South Africa and Nigeria that spread to the delicate linguistic line of Africa’s murky past.

Undoubtedly Mrs. Dlamini-Zuma’s unbeaten political and managerial track record will render her a massive clout to bring in the much needed institutional reform at the AU. But she is taking over an organization whose 54 member states have never managed to relinquish parts of their sovereignty in order to give it the real power that it needs to stand as an independent institution.

The second and much talked about strategic plan alone had 18 objectives that were hoped to have been met by the year 2012. But a closer look at each will reveal a shocking level of deficit in each.  A quick glance at some of the objectives that were supposed to have been met such as continental security and stability, sustainable economic development, continental integration, good governance, democracy and human rights makes it clear there is no need to go on to mention the rest.

A decade old and two strategic plans so far show there are also plenty of auxiliary institutions under the AU and headquartered throughout the continent that need to be hacked out, not to mention the immediate institutional reforms that need to be done at its headquarters here in Addis Ababa.