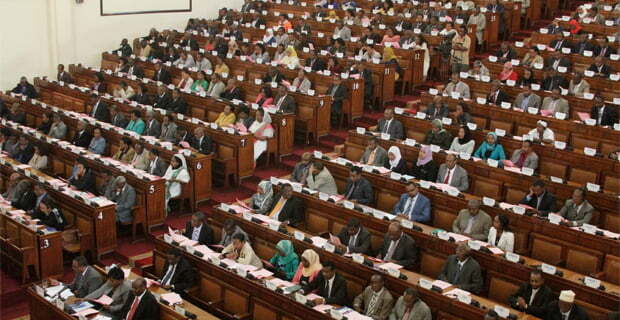 Addis Abeba, March 30, 2017 – Ethiopia extended the current State Of Emergency by four additional months. The SoE was first declared in Oct. 2016 and was due to end in April.

The House of People’s Representative, dominated by the ruling EPRDF, during its regular meeting this morning unanimously approved the extension.

Speaking to the house while explaining the necessity for the extension, Defense Minister Siraj Fegessa, who is also the front man in the ‘command post’ implementing the decree, said, “anti-peace elements” mostly in border areas were still active. The minister is referring to months-long conflicts caused by military incursions by armed men from the Somali regional state into many localities in eastern and southern part of Oromia, (bordering the Ethiopian Somali regional state in east and southeast Ethiopia). The ongoing conflicts have left hundreds of civilians dead and the destruction of an undisclosed amount of properties. But there hasn’t been an official inquiry into the ongoing incident.

Siraj also said that although calm has largely returned throughout the country as the result of the SoE, several cases were registered in which groups and individuals were involved in printing and distribution of “inciting materials.” He also added that the command post was yet to apprehend “key players” of the year-long anti-government protests that eventually led the country to declare the current SoE.

A ministerial cabinet meeting chaired by Prime Minister Hailemariam Desalegn has declared the six-month SoE in October to contain intense protests, particularly in Oromia regional state. The protests were triggered as an immediate aftermath of a mass death of civilians at the annual Irreecha festival on Sunday, Oct. 2nd.  A hysteric stampede was caused as a result of security officers’ act of firing live ammunition and rubber bullets into the air, as well as teargas bombs in the middle of major parts of a gathering of millions who started to protest at the festival. The incident has led to protests in dozens of cities and villages throughout the Oromia regional state, which, unlike the previous year-long protests that first began in Nov. 2015, have turned violent as protesters targeted foreign based and state-affiliated investments in the region.

The SoE was quickly followed by the arrest of tens of thousands of Ethiopians, marked by several violent acts by the regime’s security officials.

On March 26, an inquiry board tasked to look into the implementation of the SoE told the national parliament that 26, 130 Ethiopians were detained under SoE. Of these 475 were released after receiving ‘counseling’, while 4, 996 will be brought to a court. The remaining 20,659 were released after detention in various military camps for different periods of time, according to the inquiry board.

On March 15 the command post tasked to implement the SoE has lifted parts of the provision, including arrest without court warrants and the indefinite holding of detainees incommunicado. It also lifted the provision that the command post should monitor the contents of media and other publications, as well as curfews imposed restricting citizens’ access to industrial sites & other investment projects after 6:00 PM local time. However, Defense minister Siraj Fegessa hinted at a possible extension of the SoE, which was followed by a statement on March 23 in the parliament by PM Hailemariam Desalegn who referred to a public opinion poll result, unknown to many Ethiopians, and said 80% of Ethiopians support the SoE.

It is not clear if other provisions of what many believe is a sweeping decree will be loosened during the coming four months. AS