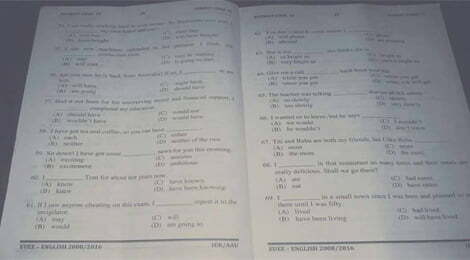 First, there was the #OromoProtest. It began (for the convenience of this short reflection, which intends to ask more questions than answers) in early November 2015 in Ginchi town, about 80km west of the capital Addis Abeba. It quickly spread like a bush fire throughout the Oromia regional state, the largest unit of the federated Ethiopia, touching upon hundreds of schools, involving thousands of students and thousands more grassroots.

I said for the “convenience of this short reflection” because that small spark in Ginchi has now led to the cancelation by the government in Ethiopia of the Ethiopia Higher Education Entrance Exam (EHEEE), which was scheduled to take place as of Monday May 30. Bear in mind though that there were, in Oromia alone,  plenty of times in the past when a regular teaching-learning process was ruthlessly disrupted, often following protests by students, both university and high school; the April-May 2014 being a recent example.

A quick forward to the current, rather persistent, #OromoProtests. The leaking by unknown individuals and the dumping on the social media by Oromo activists of this national school leaving exam has now sparked a debate amongst Ethiopia’s net-citizens, and the media. Surprisingly, (or not for that matter), the debate is on whether or not leaking the exams and dumping them  online trespasses the moral obligation of safeguarding the academic lives of more than 250, 000  students who were readying to sit for the exams.

Those against the leaking have made several points to show that the act of leaking and dumping the exams touched the moral rock bottom of online activism.  They come from two camps: those who believe the exams were indeed leaked, and then dumped on social media, and those who argue the exams were the victims of a mere theft. No need to waste time explaining the later camp. No thief in his/her right mind becomes thief enough only to dump his/her loot free on the internet. Period.

But the arguments by the former include, but not limited to, the psychological effect on thousands of students of not sitting for an exam after months of preparations; the psychological effect on young students who will be missing a year from their school schedules; the effect on thousands of students who come from poor family backgrounds and who missed on helping their struggling parents to prepare for the exams; the cost on the government (on Ethiopia’s poor by extension) of re-organizing a national exam again; and the hard work on the government of making sure that there won’t be yet another leak. Although, I am struggling to understand, some even went further and dubbed it a “war against an entire generation.”

These are all valid points. But these are only valid points under normal circumstances. Oromia, the largest state of the nine states in Ethiopia, and hence by default the state with the biggest numbers of students sitting for a national exam, has lost contact with normal circumstances since the Ginchi spark in November 2015. Political turmoil is now the new normal in the region.

But beyond the debates that mostly focused on counting the (plus, minus) numbers of the dead during the five months intensive civil resistance against the regime, no attention was given, not even by the media, to know – or even remotely understand – the psychological effects on students who were preparing to sit for the life defining exams but who, sadly, have sustained the loss of loved ones to a bullet. No one, other than Oromo activists, was interested to know just how those who have lost contacts with their loved ones who disappeared without a trace would sit for an exam and perform. There are also those who are living the nightmare of having loved ones tried in a ‘court of law’ for terrorism following their arrests in the wake of the protest and still try to attend schools; those who are left to care for family members who lost limbs during the protest and at the same time prepare to sit for a life defining exam; those, who, even as schools resumed a regular “teaching learning” process, have failed to attend classes (or failed to study after school) because they have to commute between prisons and home bringing food to their jailed, loved ones; those who have to eat less because the breadwinners in their family are either killed, or missing limbs, or in jail, or worse yet, have disappeared without a trace, and still prepare for an exam; and those who have to share what’s left of their reduced living with their brothers and sisters who have been dismissed from universities and were coping to sit for an exam. Such is how life is disrupted in the region that if one hasn’t lost a loved one to a bullet, one knows someone who has.

This now leaves us with more questions than answers. Why were there no discussions (let alone passionate debates) on how teaching-learning disruptions that occur in the wake of any civil resistance against a regime could potentially affect school leaving students? Why was there no debate, prior to the leaking and dumping of the exams, on how many of these students in Oromia were psychologically  affected by what happened between November 2015 and March 2016, (and to some extent until today?) Why were there no attempts to know how many students were missing on the exams in Oromia alone because they are dead, or are in jail, or have disappeared?

Reports say there were earlier calls both from Oromo activists, students (and some even say the regional bureau of education – although I am yet to come across such official request) to postpone exam dates in the region.  We all agree that Oromia is still reeling from the effects of a fierce civil disobedience against a regime deeply resented by even those who now argue against the moral principle of leaking and dumping of the exams. So why was there no pressure to have this request accepted and acted upon? What would it take to believe that this turmoil transcends the political offices and affects school leaving students in the region?  Why was the request to postpone school leaving exam dates in a region rocked by public protest in all its four corners not a moral request in the first place?  What would make the request morally valid? Or should it not qualify as a valid case because the students were the ones protesting against injustice?

Perhaps in defense of such questions, one of the arguments raised by the people who argued against the leaking and dumping of the exams was that the Ministry of Education (MoE) has already made adjustments to exempt schools in areas severely affected by the #OromoProtests. However, this too is an argument dotted by absent, and yet essential details, such as: which schools are these schools? How many students are exempted? When is the exam dates rescheduled for? What are the arrangements made between teachers and MoE on compensating the missing classes? What arrangement is there with universities to do the same when students join them a semester late? But most importantly, whose decision was that?

Indeed, as it stands now, there are more questions than answers and that is the purpose of this article – to ask the questions. But also to end by asking the following: what is the moral principle guiding the actions of a regime which uses lethal forces to answer its people’s questions of discontent? And what should be the moral principle guiding a non-lethal civil disobedience in response to it?