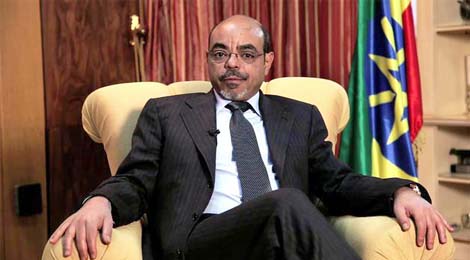 Two months after he was admitted to an undisclosed hospital abroad for a yet undisclosed ailment, Ethiopia’s Prime Minister Meles Zenawi, 57, has passed away on August 20, the council of ministers announced.

State TV broke the news to the public early this morning and said PM Meles died at 11:40 pm yesterday. According to a statement from the Council of Ministers in the last two months PM Meles had been receiving medical treatment abroad and his health “was improving.” However, he was taken back to hospital for emergency treatment after a sudden infection which occurred two days earlier. Although doctors gave PM Meles an intensive care he died “yesterday at arou

There has been scant information coming from the official channels about PM Meles’s aliment but several news outlets have been speculating his death for the last few weeks.

However, Bereket Simon, Government spokesperson, told this morning to a gathering of foreign correspondents in the capital Addis Ababa that PM Meles Zenawi “has been struggling to be healthy in the last year,” Reuters reported.