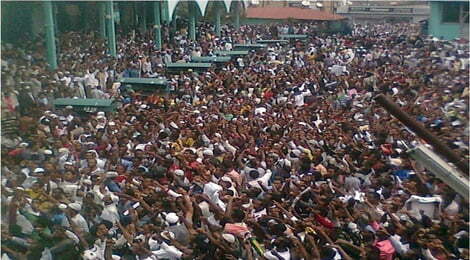 Currently the real challenge faced by Muslims in Ethiopia is not a U.S.-made amateur video clip but a sore relationship with the government

Many Muslims throughout the world are enraged about a release by few filmmakers in the U.S. of an amateur video clip that they believe insults the Prophet of Islam. Violence has erupted in Egypt, Tunisia, Yemen, Pakistan and Afghanistan as demonstrators ferociously targeted U.S. missions in these countries and elsewhere. Such angers have transcended in to physical conflicts between rioters and the police and have claimed the lives of many in Libya and Pakistan; it also caused the death of four US diplomats including its Ambassador Chris Stevens in Benghazi, Libya.

While Muslims throughout the world have continued expressing their anger mainly with violent methods, in Ethiopia millions of them have continued their peaceful resistance since December 2011 over what they believe is the government’s attempt to control their religion in the name of stamping out Islamist extremism.

A highly controversial registration process to elect new members of the Islamic Supreme Council (Mejlis) is underway; Muslim community elected committee members who were assigned to find out solutions for the existing disagreement between the government and sections of the Muslim society have ended up in Jail followed by a tense court hearing that their supporters are alert to find out.

In the midst of this, it becomes common to stumble upon a few people, including government officials, trying to perceive the actions and reactions of millions of Muslims in the past few months as sympathetic to Islamist extremism while many others view it as a mere demand to exercise their freedom of religion.

Other forms of Islam in Ethiopia

Those who are worried about the existence of Islamist extremism in Ethiopia have genuine concerns that need to be addressed effectively. Although Sufiesm has largely been the traditional form of Islam in Ethiopia, Terje Ostebo, a Norwegian researcher, in his article “The Quest of Becoming: Islamic Reform Movements in Contemporary Ethiopia,” has identified three other reform movements within the Ethiopian Muslims in the past few decades. His writing is not far from some of the glaring realities witnessed recently in many parts of the country.  According to him, the first and the most attention grabbing reform movement is the Salafi Movement which is commonly known in Ethiopia as the Wahhabi Movement. This movement is also known as Ahl al Sunna or Tawhid and has a strong ideological and financial affiliation to Saudi Arabia.

Haggai Erlich, a prominent Israeli historian, also corroborates to this theory and traces Salafism in Ethiopia from half a century back and argues it gained strong foothold through increasing numbers of Ethiopians returning from the hajji during the Italian Occupation of 1935-1941.

Both Ostebo and Erlich assert this movement started in the Eastern and South eastern Ethiopia of Harrar, Bale and Arsi and later on spread to the rest of the country. “Later in the 1960s an increasing number of Oromos from Bale and Arsi returning from religious studies in Saudi played a pivotal role in further expanding Salafism,” argues Ostebo. Save for the ideological and financial links to Saudi Arabia, the establishment and expansion of the Salafi teachings in Ethiopia is mostly homegrown, according to Ostebo. In a matter of few years, Salafism was scattered to Addis Ababa, Wollo and other parts of Ethiopia.

It was somehow interrupted during the military Derg regime but revived to a larger extent in the post 1991 Ethiopia. Here in Addis Ababa, the Ethiopian Muslim Youth Association and prominent Muslim individual scholars such as Dr. Jeylan Galata were the main advocates of Salafism. Erlich argues that “although both the individuals and associations received funds from Saudi Arabia and other Gulf states, the financial links were of highly informal or private character, making it difficult to determine the exact size of the funds, how they were channeled and how they were spent”. According to Ostebo, Salafism in Ethiopia has, to a large degree, been based on local resources, and most of the construction costs for mosques, Madrasas and the various forms of da’wa have been financed locally.

The second movement identified by Ostebo is the Jama’at al-Tabligh, which was founded globally in 1929 and is the largest Islamic Da’wa movement. Some scholars argue that this movement was introduced to Ethiopia in 1970s through South African, Indian and Kenyan Tabligh missionaries. It is predominantly exercised by the Muslim Guraghe community here in Addis Ababa and is a movement known for making its centre of excellence within Mosques. In addition, it is known for its house calls, jawala, which alerts followers to attend their prayers in Mosques.

The third reform movement is the Intellectualist Movement. According to Ostebo, it is highly informal and devoid of any organizational structure and bases its membership within students of different higher educational institutions. It is an informal Muslim Students Movement. This movement has become an important mechanism for Muslim educated elites to fight for the rights of fellow Muslim students.

The fights between them

The three reformist movements of Islam in Ethiopia are all diverted from the conventional Sufi sect of Islam practiced in Ethiopia. These movements are considered by the government as real threats to its national security. Recent developments suggest that the main conflict of the Ethiopian traditional sect of Islam Sufiesm is with the Wahhabi movement, the spread of which, ironically, has gained unprecedented momentum since the current regime took power in 1991.

The Salafis (Wahhabi) are known for their intolerance towards other movements. On the other hand, the intellectual movement perceives the Salafis as “rigid literalists, narrow-minded and ignorant of the diversity of Islamic scholarship”. While the Salafis have a strong opposition from both the Jama’at al-Tabligh and the Intellectualist Movement, the latter two have relatively good fondness to the conventional Sufi sect of Islam largely practiced in Ethiopia.

“The [Salafi] movement fiercely attacks what they regard as inclusion of indigenous elements and Sufi interpretation of Islam, in particular the pilgrimages to various shrines and celebration of Mawlid, [the birthday of Prophet Mohammad],” says Ostebo, “these practices as well as Sufism in general – [which is] the main antagonism of Salafism – has been refuted [by Salafis] as shirk – deviation from true faith”. Moreover, the Salafis have agitated for a stricter observance of Islam, with the inclusion of, but not limited to, the growing of beard, Sunnah, the wearing of trousers above the ankles, Isbal, by Muslim men and a full covering of faces by Muslim women, Niqab, all of which can be visibly seen in most parts of Ethiopia.

According to Ostebo, with the emergence of a new sect called Takfir wal Hijrah group, the Salafi movement in Ethiopia has reached a new twist in 1994-1995. The group had attracted several young Ethiopian Muslims who subsequently distanced themselves from other sects of Islam. It fiercely criticized shirk among fellow Muslims and labeled other sect followers of Islam as kafirs.

In 2002, a young scholar named Hassan Taju, published a book fiercely criticizing the Takfir [wal Hijrah group], according to Ostebo, which finally led the Takfir to lose momentum even within the Salafis. Since then the Salafis Ulama has publicly denounced the Takfir movement. However, since the death of its leader Sheik Muhammed Amin in 2004, the Takfir has lost its zeal. Other groups linked to the Saudi based Madhkaliyyah have tried to continue the Takfir ideology but little is publicly known about their movement in the last few years.

Understandably, it’s the real existence of the teachings of such groups that the government in Ethiopia is up in arms against. Islamist extremism breading grounds in neighboring Somalia and Yemen makes the presence of such groups in Ethiopia pose real threats to the national security and the largely peaceful Muslim community. This compels the government to take actions to protect its national security and innocent Muslims in its turf. However, the collective manner by which it is trying to control the fast unfolding events has been largely questionable.

Millions of Muslims and the state are now locked in dispute over the location of polling stations to elect the new members of the Majlis. Disagreements are also rife over what millions of Muslims believe the government’s attempt to introduce new teachings, notably Al-Ahbash, to stamp out extreme leaning teachings by the Salafis and other sects. To make matters worse, the government has collectively jailed committee members elected by the Muslim community in Addis Ababa to come up with solutions to settle disagreements between Muslims and the government. Most of these are extensions of the states’ desperate action to control Islamist extremism, the threat of which can’t be ruled out either.

The value of friendship