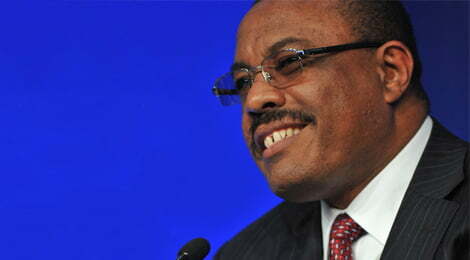 For the first time in its history, on Sep. 24th 2012, the UN has held a high-level meeting “devoted to the rule of law at the national and international levels,” as one of the side events during the sixty-seventh regular session of the General Assembly that took place in the last week of September 2012.

Three days before the UN’s first-time meeting on the rule of law, the Ethiopian national parliament swore in Prime Minister Hailemariam Desalegn who shortly after that traveled to attend the UN summit as head of the government. Prime Minister Hailemariam began his first trip abroad as Ethiopia’s head of government by attending the UN assembly on the rule of law on 24 September, a day before the general debate opened. This comes as a pleasing coincidence for many good reasons.

By the time Addis Standard went to the printing press on Sep. 24th heads of state and government from many countries have pledged their voluntary participation in the meeting that was first and foremost organized to alert Member States on issues such as compliance with international laws, accountable and transparent delivery of justice and of government services to citizens and fostering an enabling environment for sustainable human development and economic growth.

According to the UN, at the international level, “the rule of law accords predictability and legitimacy to the actions of States, strengthens their sovereign equality and underpins their responsibility to all individuals within their respective territories and subject to their respective jurisdictions,” while at the national level “strong, inclusive and accountable institutions that demonstrate the equitable application of the rule of law are crucial for preventing conflict and consolidating post-conflict peace building gains.”

Needless to say, Prime Minister Hailemariam has just become a head of government to a country whose record of respect to some of the national rule of law falls short of meeting reasonable standards.

In his acceptance speech on September 21st, Prime Minister Hailemariam maintained his role as the next PM would be to implement the policies designed under the supervision of the late PM Meles Zenawi with no change whatsoever. However, participating in the UN’s high-level meeting on rule of law should reveal to him (if it should for the first time) that the judiciary in Ethiopia, among many important institutions, is anything but “strong, inclusive and accountable…that demonstrates[s] the equitable application of the rule of law.”

Prime Minister Hailemariam pledged his government was ready to work with all “decisive democratic institutions” including human rights, ombudsman, press, and electoral board, provided they in turn operate within the framework of the country’s established rule of law.

According to a report by Secretary-General Ban Ki-moon, the UN defines the rule of law as “a principle of governance in which all persons, institutions and entities, public and private, including the State itself, are accountable to laws that are publicly promulgated, equally enforced and independently adjudicated, and which are consistent with international human rights norms and standards.”

As such, the constitution in Ethiopia guarantees pretty much everything when it comes to human rights, freedom of the press and free and fair election among others. The trouble begins when it comes to accountable and transparent delivery of the written law.

“Within justice, security and law-making institutions, it is important to enhance transparency, accountability and oversight, and to widen participation in decision making processes, in order to build public confidence and trust,” the UN says, something that is in short supply in Ethiopia.

With its first ever meeting on the topic, the UN tells Member States that they should ensure that their legal frameworks include basic principles of open government, such as fiscal transparency, access to information, disclosures related to public officials, and accountability among others and that “such legal frameworks are effectively implemented.”

Prime Minister Hailemariam Desalegn may have taken a good note of this, hopefully.