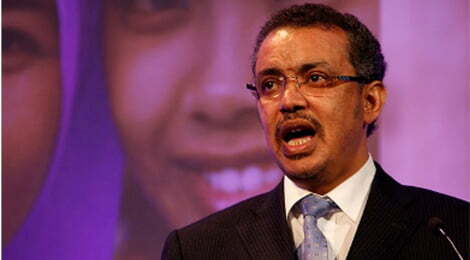 In addition to his pick for the highly expected position of the next Minister for Foreign Affairs, PM Hailemariam appointed two more Deputy Prime Ministers. Accordingly,   Debretsion Gebremichael, Minister of Information Technology and Deputy Chairman of Tigray Peoples’ Liberation Front (TPLF), was appointed as Finance and Economic Cluster Coordinator with the rank of Deputy Prime Minister and Muktar Kedir, Deputy Chairman of the Oromo Peoples’ Democratic Organization (OPDO), was appointed as Good Governance 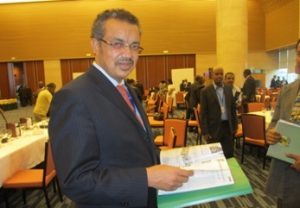 Dr Tedros Adnahom said he was this magazine’s “regular reader”. He was pictured here holding the May edition of Addis Standard in which a News Analysis assessing the health sector in Ethiopia was published

Reform Cluster Coordinator with the rank of Deputy Prime Minister. Muktar will also replace Junadi Sado, Minister of Civil Service whose wife is facing terrorism charges along with 29 Ethiopian Muslims. TPLF and OPDO are two of the four founding parties of the ruling Ethiopian People’s Revolutionary democratic Front (EPRDF). The cabinet is now led by the Prime Minister and his three deputy Prime Ministers.  Demeke Mekonnen, who is from the Amhara National democratic Movement (ANDM), and is the Minister of Education, was PM Hailemariam’s first choice as his deputy in Sep.

Rumors of the likely appointment of two more Deputy Prime Ministers started surfacing following the appointment as Chairman of EPRDF of PM Hailemariam Desalegn in September, something government chief spokesperson Bereket Simon entirely dismissed when asked by this magazine and other journalists on Sep. 15th this year.

The biggest surprise of yesterday’s cabinet reshuffle was however the appointment as Minister of Foreign Affairs of Dr. Tedros Adhanom, who served as Health Minister. In his previous position Dr. Tedros, who was the winner of the 2011 Jimmy and Rosalynn Carter Humanitarian Award,  is widely  accredited as an accomplished minister who oversaw one of the biggest reforms in the history of the country’s health policy. But he is also said to be one of the closest friends of Azeb Mesfin, the widow of the late Pm Meles Zenawi.

Many saw the move as politically manipulated, making his appointment appear more of a power balance game than an appointment of merit. Berihu Assefa, an Ethiopian economist living in Tokyo, Japan, lamented the appointment as one that has given “little emphasis on education and  relevant experience,” one of the issues the late PM “had been criticized”, said Berihu on his facebook. “When PM Hailemariam Desalegn says he is committed to continue the legacy of the former PM, I thought it was only the good ones,” Berihu wrote.

In addition to that, many Ethiopians are now expressing their concern as to who would exactly replace the current PM in the event of resignation or incapacitation, for example, as the constitution doesn’t clearly provide any provision for replacement.