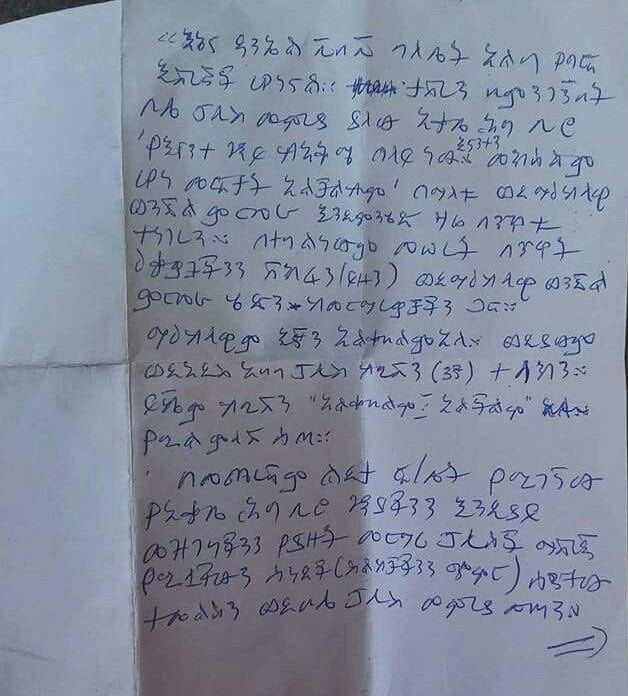 Addis Abeba, April 12, 2017 – Jailed Ethiopian journalist Elias Gebru and former opposition party leader Daniel Shibeshi say prison officials at the Bole Sub City detention facility, where they have been held for the last five months without charges, have told them that they are neither able to bring them to a court of law nor releases them or hold them at the center.

In a hand written letter addressed to his family members and friends, journalist Elias Gebru wrote on April 10 that the police officers from the station they are held at have told them “your case is beyond our jurisdiction, however we cannot release you or bring you to a court of law.” The letter further said the officers have then transferred both him and Daniel to the notorious prison center, Ma’ekelawi. However, prison authorities in Ma’ekelawi have refused to admit them, during which both were taken to prosecutors’ office at the federal court in Lideta Sub city. The police have then submitted to prosecutors what they claimed were evidences against the two, which included their cell phones that they have given to the police when they were first detained five months ago under the current State of Emergency. Both Elias and Daniel are now back at the Bole Sub City detention facility, where the officials already said it was beyond their jurisdiction to hold, prosecute or release them. 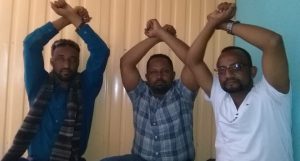 Photo of the three was posted on social media and was shortly followed by arrest (Left to right: Elias, Anania and Daniel)

Elias and Daniel were originally arrested along with Anania Sorri in Nov. 2016. Anania was released on March 13 but the two remained jailed and have not been brought to court. The three were detained shortly after they have posted on social media their picture (See story picture), with crossed arms above their head, made famous as a symbol of the yearlong protest in Oromia regional state, which was followed nine months later in Amhara regional state, the largest and second largest regional states according to Ethiopia’s federal arrangement.

More than 26 thousand Ethiopians were detained in various military camps shortly after the declaration of the current State of emergency On October 08 2016. More than 20 thousand have since been released but the government said about 5,000 would be brought to court. However, both Elias, Anania and Daniel were neither taken to detention centers nor to a court and no explanation was given for the release of Anania. Earlier, the trios have complained about abuses in the police station they were held at.

Journalist Elias Gebru was the editor of a now defunct Amharic weekly “Addis Gets” and Daniel Shibeshi was former senior member of the opposition UDJ/Andinet. Both have been in and out of prisons for several times in the past.