All the four officials have failed to appear in court

Addis Abeba, December 28/2017 – The Secretariat of the OPDO Central Committee has asked the federal high court 4th criminal bench  to get a new appointment date for its high level officials who were summoned to appear in court as defense witnesses in high profile terrorism and criminal cases. The letter also stated the officials were unable to attend the court due to “urgent meeting about the country” that they were attending at the moment. The letter came despite yesterday’s assurances from the defense team that the officials would appear in court today.

On Tuesday December 26, The Federal High court 4th criminal bench has begun hearing defense witnesses in the cases brought by the federal prosecutors against senior and junior members of the opposition Oromo Federalist Congress (OFC) and others under the file name of Gurmesa Ayano et.al.

However, all the senior government officials summoned by the court to appear as key defense witnesses have missed the three day defense hearing  which is scheduled to end today. 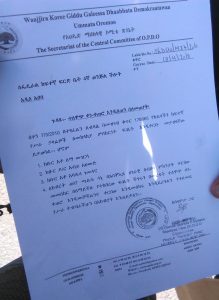 Copy of the letter from the OPDO Central Committee Secretariat. First posted by Journalist Belay Manye

In its ruling on August 18th, the court issued a letter to summon the high level government officials as defense witnesses for four of the 17 defendants in the case. They are Gurmesa Ayano Weyessa, Dejene Taffa Geleta, Addisu Bulala Abawalta and Bekele Gerba Dako.  The list of witnesses submitted by the four defendants included Ethiopia’s Prime Minister Hailemariam Desalegn; Lemma Megersa, President of the Oromia regional state; Dr. Abiy Ahmed, Secretariat of the OPDO, the party governing the Oromia region; Abadula Gemeda, former speaker of Ethiopia’s House of People’s Representatives (HPR); as well as Chaltu Nani, Mayor of Lege Dadhi town in the Oromia regional state special zone.

On Tuesday, Prime Minister Hailemariam’s office sent a letter to the federal court stating a “busy schedule” as the reason for the Prime Minister’s absence.

All the defendants are following their cases in the court since they were first detained in Nov.-Dec. 2015.

Defense witnesses hearing for the 17  defendant is taking place since Tuesday. However, the prison administration has failed to bring Andualem Arage, another key witness summoned by the court as defense witnesses for Bekele Gerba, saying he was a high security prisoner.  Andualem was the Vice President and Press Secretary of the opposition Unity for Democracy and Justice party, who is himself sentenced to life in prison on terrorism charges.

The defense witnesses hearing also began in the backdrop of the news that Bekele Gerba, first secretary general of OFC, was “gravely ill” and was not allowed to get medical treatment. In addition to general charges along with the remaining defendants, Bekele is also following another decision by the Federal Supreme Court to allow him a 30, 000 birr (about US$1, 094. 00) bail, which was quickly suspended by the Cassation division (bench) of the Supreme Court. The  Cassation bench said it halted the supreme court’s decision to bail Bekele on the grounds that prosecutor’s appeal against the downgrading of Bekele’s original charges of terrorism  to criminal charges were not addressed. The federal court gave another date to pass its verdict on Bekele’s request of clarification on his bail grant.

The court is expected to give its response to the OPDO’s letter at the end of today’s defense witness hearing.  AS